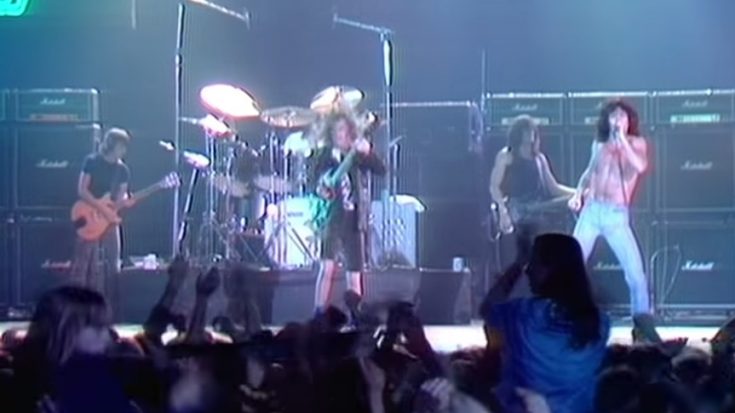 AC/DC’s Highway To Hell album spawned some of the band’s most iconic cuts, including the title track itself. Credited to Angus Young, Malcolm Young, and Bon Scott, “Highway To Hell” contains the gigantic riff that drives the whole thing around, while the inspiration of the song came from the band’s tedious experience of touring in support of their album releases.

However, this isn’t the only reference that “highway to hell” pointed to. It was also the nickname for Canning Highway in Australia and starts from where Scott lived in Fremantle and ends at a pub called The Raffles, where rock bands and fans frequented in the day. There is sudden steeping on the highway as it gets close to the pub which has been an accident-prone area, hence the name. When Scott said “I’m on the highway to hell,” he meant going down to the Raffles pub to have a good time. “Ain’t nothing I would rather do. Going down, party time, my friends are gonna be there too,” he said.

Another explanation comes from vocalist Brian Johnson, who replaced Scott when he died six months after the albums’ release. He said to The Metro on a 2009 interview, “It was written about being on the bus on the road where it takes forever to get from Melbourne or Sydney to Perth across the Nullarbor Plain. When the Sun’s setting in the west and you’re driving across it, it is like a fire ball. There is nothing to do, except have a quick one off the wrist or a game of cards, so that’s where Bon came up with the lyrics.”

Producer Mutt Lange was instrumental in the album’s making, especially the use of the double guitar attack which was refined on later releases by AC/DC. Watch the band dish it out Live From Countdown in 1979 by clicking on the video below.