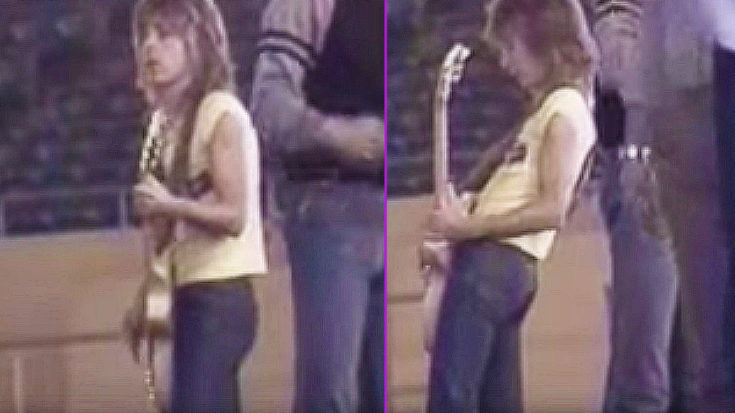 One of the greatest tragedies surrounding the death of Randy Rhoads is the lack of live footage of the rock legend. His career tragically cut short at the age of 25, it was one thing to hear Randy’s guitar playing on Ozzy Osbourne and even Quiet Riot albums but for those that had the privilege of seeing him live, the experience was nothing short of magical and thanks to a few fans who thought to record anything on television that mentioned Randy, those of us who didn’t get a chance to experience Randy’s magic now have the chance to – which is what happened in the case of this newly surfaced rare footage.

Fun Fact: Growing up, Randy’s family didn’t own a stereo. He and his siblings Kelle and Kathy created their own music to entertain themselves.

Shot a month before his death while on tour with Ozzy Osbourne, Randy is seen here in the only known footage of the legend during soundcheck, giving fans a little insight into how he made magic with a guitar in his hands. We know he practiced his craft faithfully and had a commitment to excellence that all too many artists shy away from these days, but it’s another thing entirely to see it in action, even if it’s only for a few moments.

“Randy Rhoads was a big part of my life, and he still is to a certain degree. I’m always thinking about him.” – Ozzy Osbourne

Running just under 10 minutes in length, this ultra-rare footage is a great little glimpse into a part of Randy Rhoads’ career that those who knew him best remember vividly, and very few got to see in action. Check it out in the video below – it’s definitely worth a watch and it will likely give you goosebumps!