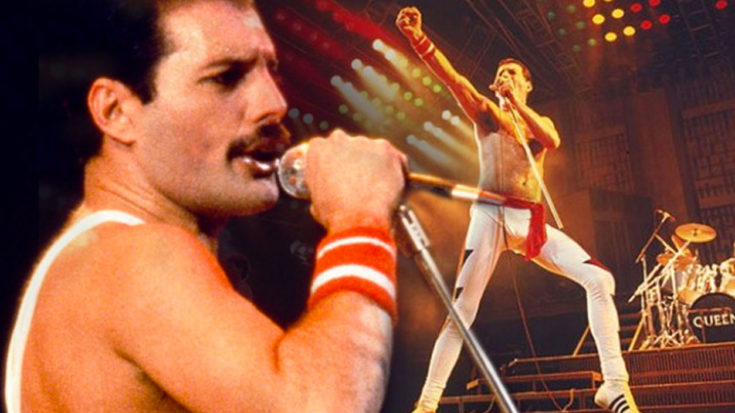 It’s been over 30 years since Queen captivated an audience of 600,000 people over the course of two nights as they headlined Rock In Rio in 1985, but we still can’t stop talking about it! One of the last major appearances by the band, Queen’s Rock In Rio performance has been described as both mesmerizing and iconic, with late frontman Freddie Mercury described as being in especially rare form as he took the stage those nights. While the band’s setlist for Rock In Rio held several gems that no doubt delighted Queen fans, it was their performance of “We Will Rock You” that really brought the house down.

Freddie, wrapped in a double-sided flag bearing both the Union Jack and the Brazilian flag and sporting a long, black mullet wig is every bit the rock god he set out to be so many years before. As an added bonus, if you look closely you can even spot bassist John Deacon dancing in place along with him to the unrelenting rhythm set by drummer Roger Taylor.

Fun Fact: When performed live, the song is usually followed by “We Are the Champions”, as they were designed to run together.

Of course, no respectable Queen performance “We Will Rock You” would be complete without a flawless segue into “We Are The Champions” – where “We Will Rock You” was made for getting a crowd ready to make history, “We Are the Champions” is the consummate victory anthem, celebrating how far they’ve come and where they still have the chance to go. Queen may have been less than a year away from their final live performance with Freddie Mercury, but in that moment they were too busy delivering on their promise to rock Rio!