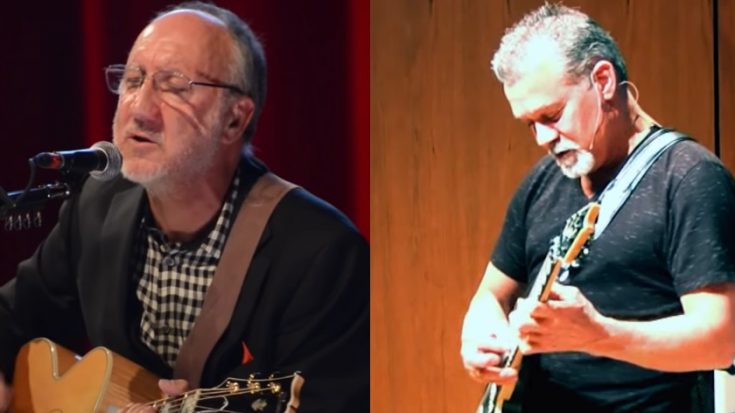 When you’re Michael Jackson, you can pretty much ask anyone to be your song. The Who’s Pete Townshend was once asked to participate in Jackson’s acclaimed 1982 album, Thriller.

Townshend didn’t accept the invitation but recommended Eddie Van Halen instead. He contributed to the 1983 cut, “Beat It”, which became part of the late iconic rocker’s impressive resume outside of Van Halen, as it became one of the most successful singles of all time. In an interview with Rolling Stone, Townshend said, “I said I couldn’t do it but recommended Eddie, who called, and we chatted. He was utterly charming, happy about the connection, but told me how much he was enjoying playing keyboards.”

Van Halen was pretty busy with his band’s own material at the time, which was another great hit of the era. “Jump” became one of the trademark songs of the band due to its unusual usage of synths instead of the standard heavy sound of the band.

“Beat It” managed to top the singles charts for three weeks. It was Jackson’s first attempt at a rock song, and also included Toto’s Steve Lukather on guitars. “I wanted to write …the type of song that I would buy if I were to buy a rock song. That is how I approached it, and I wanted the children to really enjoy it – the school children as well as the college students,” said Jackson in a 1984 interview with Ebony.

Townshend was all praises to Eddie Van Halen, saying: “His smile was just classic. A man in his rightful place, so happy to be doing what he did. … As he got older, he became more generous and amusing and self-effacing about his enormous gifts. He shared so many tricks through guitar workshops, online and on TV shows. Immense talent.”

He was extremely saddened by his sudden passing, saying, “He was not just an innovative and stylish player with great taste, he was also a laidback virtuoso showman who just blew us all away every time. Every shredder today has lost their master teacher and guide,” Townshend said.

Townshend called him the “Great American Guitar Player,” and “was hoping he might be president one day.”