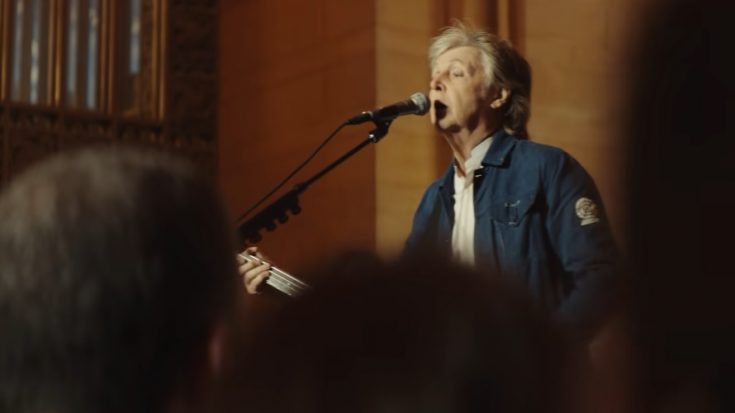 Paul McCartney recently revealed how the Beatles song “Sun King” actually had meaning behind its nonsensical lyrics – and a suggestive one at that.

The Abbey Road cut had the band pitching in some meaningless phrases that sounded like they were Spanish, including the words “chicka ferdy”. John Lennon said back in 1969 that it meant as a childish teasing between young people loitering the street, but McCartney has implied that there was more to it than what met the eye.

In an interview with the Mirror, McCartney said, “There was a thing in Liverpool that us kids used to do, which was instead of saying ‘fuck off,’ we would say ‘chicka ferdy’. It actually exists in the lyrics of the Beatles song ‘Sun King.’ In that song, we just kind of made up things, and we were all in on the joke. We were thinking that nobody would know what it meant, and most people would think, ‘Oh, it must be Spanish,’ or something. But, we got a little seditious word in there!”

He added that the childhood practice of making up phrases that only his friends knew the meaning was carried over to his days in the band. “We had a few words and phrases that, if one of us said it, would amuse the others because it was like a secret code. We just used to say absolutely silly little things,” he shared.

Just shortly after the album was released, Lennon provided some insight regarding the lyrics of “Sun King”, saying, “We just started joking, you know, singing ‘quando para mucho.’ … We just strung any Spanish words that sounded vaguely like something. And of course we got ‘chicka ferdy’ in. That’s a Liverpool expression. Just like sort of … it doesn’t mean anything to me but ‘na-na, na-na-na!’”

The Beatles playing naughty wasn’t exactly a big secret either. In the late John Entwistle’s unfinished memoir, he recalls overhearing the band singing racy lyrics during a concert, as they realized they couldn’t be heard over the cheers of the audience and decided to have a little fun instead. “Soon, the four of us were crying with laughter at the words they were singing and which only we were able to pick up on. ’It’s been a hard day’s cock … I wanna hold your cunt,'” Entwistle wrote.