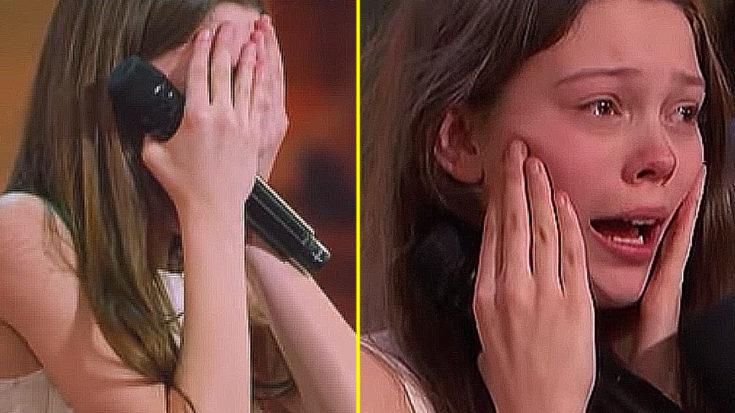 Where Did That Voice Come From?

For a second, it looked like 13-year-old Courtney Hadwin wasn’t going to be able to go through with her audition on America’s Got Talent.

Social anxiety looked like it had her in its clutches, ready to ruin her big moment before it even started.

Likeable with a sweet smile and soft voice, Courtney’s brief but polite interaction with the judges left Howie Mandel, Mel B., Heidi Klum and Simon Cowell ready to gently write her and her cover of Otis Redding’s “Hard To Handle” off if and when it became clear that she just didn’t have what they were looking for.

I didn't know what to expect when I auditioned for @AGT but the golden buzzer was more than I ever could have dreamed of. Thank you so much @howiemandel I am so happy and can't thank you enough xx pic.twitter.com/qqNKUWyzVk

But that moment never came.

Social anxiety be damned, Courtney opened her mouth and unleashed a voice that seemed wildly out of place – not just for her small frame, but for her 13 years. Eyebrows flew up and jaws dropped as the judges, AGT host Tyra Banks and the crowd in the audience wondered just where the hell that voice came from. It was Janis Joplin’s power, Grace Slick’s unapologetic brass and Otis Redding’s heart and soul rolled into one as Courtney shimmied and shook her way across the stage; where did the shy little girl who looked like she’d crumble if you so much as looked at her the wrong way, go?

SOUND THE ALARMS! @CourtneyHadwin just BLEW. US. AWAY!

Who knows, and who cares? Here was Courtney’s moment to show the world what she and her dad have always known – that she was born to entertain, and would overcome anything silly enough to try and stop her.

As the last note rang out, Simon Cowell called her a lion; Heidi Klum had a hard time formulating a compliment strong enough to do justice to Courtney’s performance. But it was Howie Mandel that said what everyone was thinking: “You are not from this era. You’re from a whole different era,” as he reached over and slammed the golden buzzer, propelling Courtney into the live rounds of the competition.

She burst into shock and then tears as the confetti fluttered down around her, running into her dad’s arms. The best part is that as amazed as everyone was with her performance, Courtney was just as blown away by what she just made happen. She’d better get used to it; if this is what she brought out from the depths of her soul for her audition, then America’s Got Talent had better buckle up and get ready for its next winner!