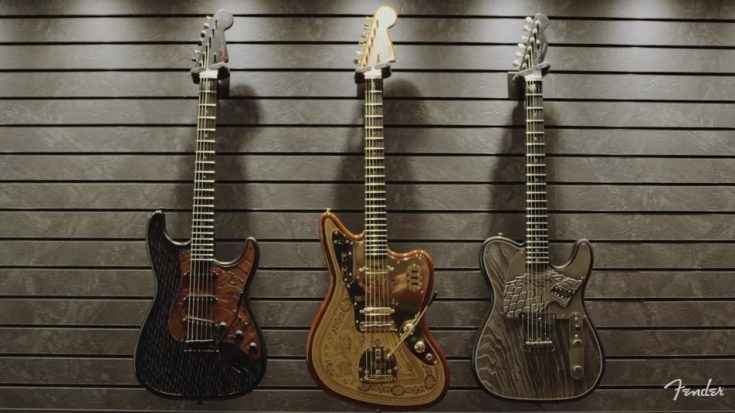 Highly acclaimed fantasy series Game Of Thrones has yet reached another milestone in its run. Hailing from George RR Martin’s A Song of Fire and Ice, it was released in 2011 and now at its 8th season. Creator D.B. Weiss, being a hardcore guitar enthusiast, pulled some strings and managed to convince guitar giant Fender to produce a customized guitar series inspired by the Game Of Thrones universe. A video recently came out, with D.B. Weiss, GoT composer Ramin Djwadi, and some of rock’s iconic guitarists, who were also avid Game of Thrones fans. Extreme’s Nuno Bettencourt, RaTM and Audioslave’s Tom Morello, and Anthrax’s Scott Ian were spotted jamming together to the fantasy series’ epic opening soundtrack.

After a brainstorming session with Fender’s veteran guitar builder Ron Thorn, three guitars came out for production. Each of these guitars symbolize one of the three main houses in the show. Each of them are characterized by the coat of arms for each house, each with their own touch of regal air. “The telecaster is the instrument that the good guy plays, that the sheriff plays, and the Starks seem to embody that. They have that integrity and no nonsense approach that seems perfect for a telecaster,” says Weiss on the House of Stark Telecaster custom.

The House Lannister Jaguar is an extravagant piece, with a 24k gold leaf emblazoned on the instrument’s body. The sinister looking House Targaryen stratocaster has the body painted with scales to the likeness of a dragon’s. Thorn commented on the piece, saying it was “the most difficult instrument I’ve ever worked on.” After the ceremonious performance, Weiss and Thorn discuss the guitar’s designs and highlight the detailed features on each of the instruments.

These guitars are hand built to order, with prices ranging from $25,000 for the Stark telecaster, $30,000 for the Lannister Jaguar, and over $35,000 for the Targaryen strat. Check out the images below for a preview of these magnificent instruments!