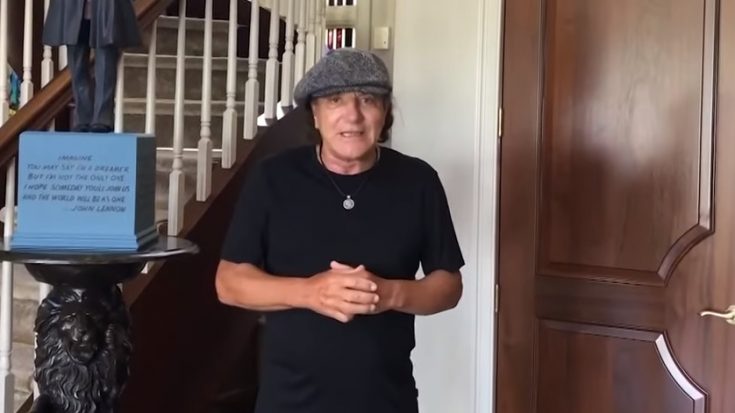 AC/DC frontman Brian Johnson gave a video message for this year’s edition of Bonfest – an annual event held in Kirriemuir, Scotland in remembrance of the late Bon Scott in his hometown. The event usually lasts for three days, but due to the social distancing and isolation protocols for the pandemic, it has been replaced by a 6-hour live stream tribute.

From his home, Johnson shared his message, saying, “Hey everybody. I know you’re all disappointed that the Bonfest is not going to be on this year, but as you know this virus has got everything pretty screwed up. But I’m sure it will be back next year bigger and better and we can all go and celebrate our favorite singer’s life.”

He continued, “I’ve got nothing much to say except the fact that I’m as bored as all you are, I just want to get out there. Keep tight, stay safe, and we’ll see you all again. As Bon would’ve said, ‘Ride On’, we’ll see you then.”

Bon Scott died after a night of heavy drinking in London at the age of 33. AC/DC then brought in ex-Geordie frontman Johnson to do lead vocals for them, releasing Back In Black just five months later – a comeback for the band and a tribute to Scott as well.

Bonfest organizer John Crawford explained how he got Johnson to be part of the 2020 event, saying, “I managed to get in contact with Brian and we have spoken several times over the last two weeks. He’s a down to earth, genuine man and an incredible storyteller. We got talking about Bonfest, which he already knew about and agreed to do the video clip so I can’t thank him enough for his help and time.”