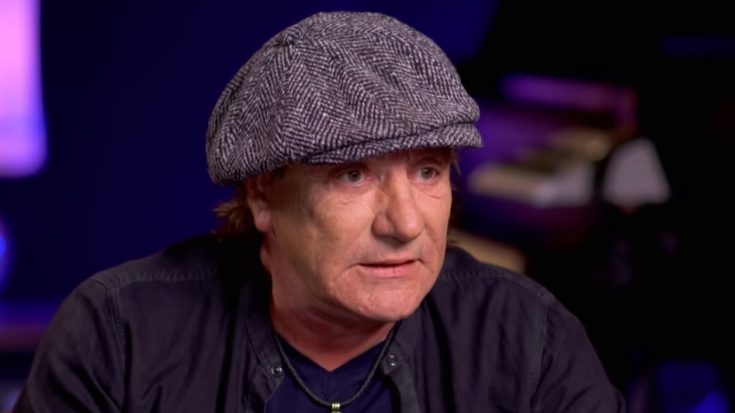 AC/DC frontman Brian Johnson says the late Malcolm Young’s spirit really made itself felt in the new AC/DC song from Power Up, “Through The Mists Of Time”.

Johnson said he thought of the late rhythm guitarist and band co-founder were running through his mind when he was recording vocal parts for the song – which also had the lyrics written by Angus Young, lead guitarist, and brother of Malcolm. “Whenever I hear it, I still get goosebumps,” Johnson said in a new Independent interview.

“I still think of him. I was thinking of him when I sang it. It’s just these things about the happy days when we first started in the ‘80s, when I first joined the band. I just remember these very happy, carefree days. And Angus did a magnificent job of putting those lyrics together. I think he really felt it, too, because him and Malcolm were inseparable,” he continued.

Johnson said that Malcolm’s presence was also felt by the whole band when the recordings began. “None of us are spiritual, please don’t even think that,” he shared. “But he was just there. He was a strong, strong character in real life, and passing on didn’t seem to affect his character! He was there and we all knew it. We all just had this enthusiastic feeling that we were doing something that was worthwhile for Malcolm, that would make him proud.”

He went down memory lane and recalled the moment of how Malcolm regarded him when they first met – at auditions looking for the late Bon Scott’s replacement. “I opened the door and I went, ‘Hello lads, I’m Brian from Newcastle – sorry, I’ve been a bit late!’” Johnson said. “And Malcolm went, ‘Oh, there you are!’ And he came over and he gave me bottle of brown ale, and he said, ‘It’s a long drive down, isn’t it?’”

Johnson said the encounter put his mind at ease, noting that: “I didn’t know them as individuals; they could’ve been snotty, but they [weren’t]. … Malcolm was so generous with himself to everybody. He always had time. Mind … he lost his temper because somebody had really been dumb … he just wouldn’t suffer fools gladly.”