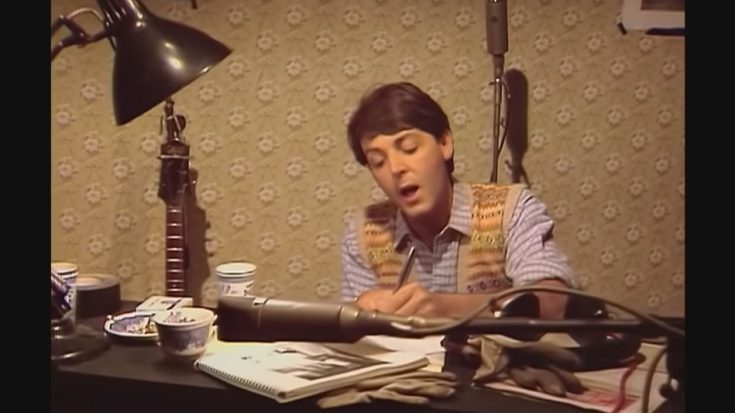 There wasn’t a doubt that The Beatles were a band of tightly-knight brothers from different mothers, especially the creative duo of John Lennon and Paul McCartney. But as the band’s career progressed, the two grew together apart, clashing ideologies and idiosyncrasies that ultimately led to their downfall in 1970.

Luckily, Lennon and McCartney reconciled away from the public eye just before the former’s death in 1980. This affected McCartney deeply, knowing that he was never going to see his friend again. Despite being heartbroken from the event, he rushed to the side of Yoko Ono and son Sean. But this wasn’t enough to offload all of his grief with this method, so he turned to what he knew and did best to ease the pain: songwriting.

His emotions would feed the creation of the song “Here Today”, which was a part of his 1982 album, Tug Of War. It was written in a period of grief as McCartney was still reeling from Lennon’s death, not to mention that it was hard to reconnect with his former bandmates George Harrison and Ringo Starr.

The song contained their usual dose of banter, but it was a futile attempt at McCartney wearing his heart on his sleeve as the person it was dedicated for was already gone. He portrays their relationship with tensions on the surface, but actual love and concern were underneath it all.

Whenever he performs it on a tour, McCartney admitted that it still got to him from time to time. And it wouldn’t be a surprise, as McCartney treated the man as his own blood, and loved him even more so in his absence.