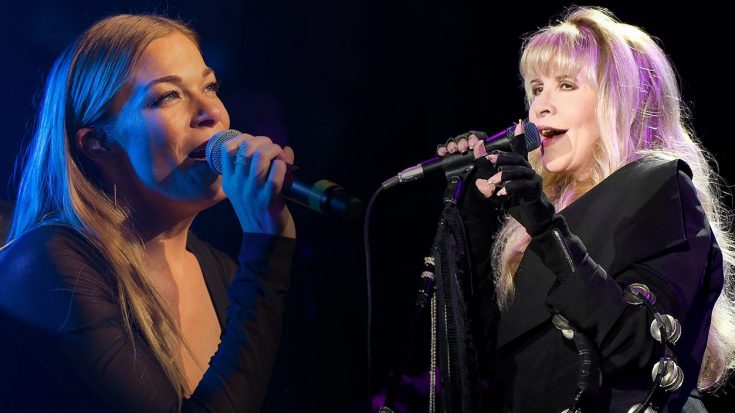 If Stevie Nicks thinks you’re cool, then damn it, you have made it!

Appearing on the album in a feature capacity, Nicks was careful not to reveal much – if anything, really – in the way of details regarding her collaboration with Rimes until the magic moment arrived, but when her glittery pop rock sound comes together with Rimes’ own country roots, the final product proves to be nothing short of magic, giving way to the most bewitching musical – and surprising – collaboration of the year.

I’m beyond excited to announce that the last track on the Re-Imagined EP features the incredible @StevieNicks. We had the best time re-recording this in the studio. Head over to @RollingStone for the exclusive first listen to Borrowed (Re-Imagined) https://t.co/vtOe9ISxzA pic.twitter.com/8Oh4eVxlLJ

Calling it “our destiny,” Stevie reveals that she decided to work with LeAnn all the way back in 2013. She’d caught Rimes’ performance of “Borrowed” on The Tonight Show and was immediately floored; not just by the sheer talent Rimes displayed, but by the song’s painful lyrics – ones she could relate to all too well.

“I stopped in my tracks and sat down on the floor and started to cry,” Nicks told Rolling Stone. “I understood what she was singing about. I understood that the pain was real… and I understood that it had happened to me. When the song ended, I called my assistant to tell her that one day, I would sing this song with LeAnn. It was our destiny.”

The rest, as they say, was history.

The universe conspired to bring these two together, allowing for Nicks and Rimes to approach this stripped down version of “Borrowed” from the perspective of two artists who are tremendous fans of the other’s work. One of the truly great things about Stevie Nicks being enlisted to sing on the track with LeAnn Rimes is the fact that you never, ever hear Stevie trying to run roughshod or take control. In this case, she’s totally happy to play a supporting role in bringing LeAnn’s creation to life, and as she carries the lower harmony it turns “Borrowed” into a tale of love and loss told from the perspective of a young woman in the moment, and an older woman looking back on the affair.

“You can’t compete with her; you can only keep up with her,” Nicks says of Rimes as a singer and songwriter. “To sing with her is to be blessed. She teaches you; she takes you along for the ride. She takes you on her journey and you arrive a much better singer.”

A melancholy track with just enough magic to take you away, “Borrowed” is a gorgeous fit for Stevie, whose own lyrics have always carried a hint of that soul deep sadness. Check out Stevie and LeAnn’s duet in the video below!