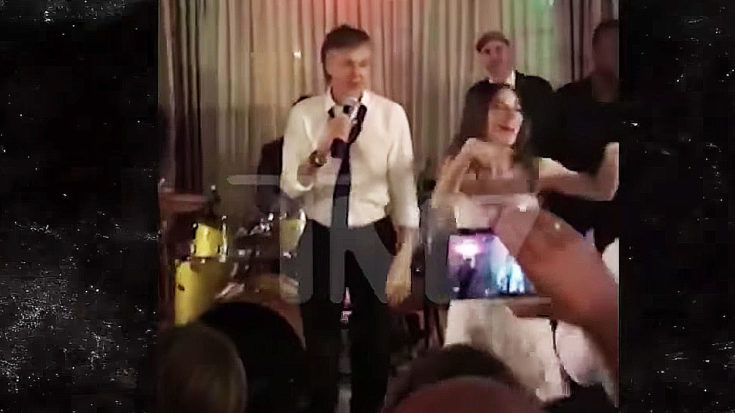 Paul McCartney may be 76 as of today, but don’t think it’s going to slow him down – not even for a second!

The former Beatle spent his birthday weekend in the company of family, attending a 300+ guest wedding at Long Island’s Fresh Meadow Country Club on Saturday where he turned the reception into one seriously epic Beatles dance party. McCartney, 76, was dancing with the wedding guests when he jumped onstage with the 20-piece wedding band and gave an impromptu performance of “I Saw Her Standing There” for the crowd, getting everyone from the bride and groom to the band behind him clapping and dancing along.

In 2015, Paul dusted off “I Saw Her Standing There” at his stepson’s graduation party. To the delight of local Florida band Phase5, McCartney jumped in during the band’s break and asked if it would be alright if he sat in for a few songs; of course, when a legend asks you if he can jam with your band, you do anything to make it happen, so Phase5 picked up their instruments and played along as Paul improvised a song about his stepson’s graduation.

“He had us play a blues progression and he improvised a song about his stepson’s graduation,” Walther continued. “And then we did ‘I Saw Her Standing There.’ We went through basically the whole catalog of Beatles songs we knew and he really wanted to do “[I] Saw Her Standing There,” but we had never played it. Our piano player pulled up a chart off the internet and we just totally winged it. It turned out great.”

Wedding and event bands, let this be a lesson to you: always be prepared, because you never know when Paul McCartney is going to show up and turn your show into a Beatles dance party!