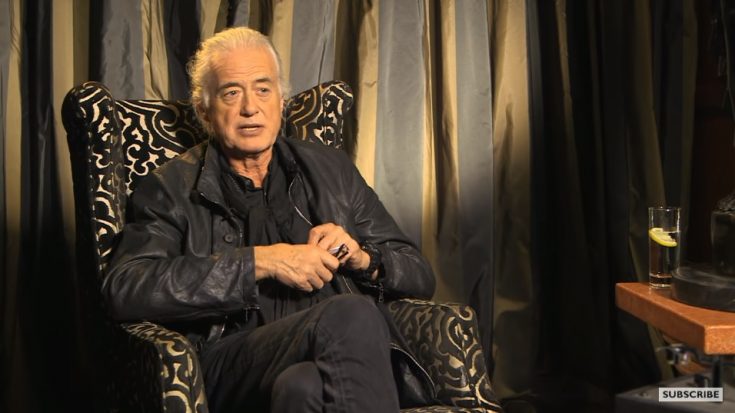 Led Zeppelin’s guitar maestro Jimmy Page revisits their 1971 hit, “Stairway To Heaven“, 43 years after its release. In an interview with BBC News, Page reveals how the song came to be, and outlines the fundamental backbone of the song.

With the song’s vinyl being played in the background, Page says the intro was planned as some sort of poor man’s theme, with a Renaissance style progression and a melancholic melody that tries to lead the listener to the unfolding narrative being told. John Paul Jones’ suggestion of having recorders on the track adds a haunting yet serene motif to the ballad.

The song was to have some sort of an advancing and growing passage, with its sections eventually progressing faster, and louder as it neared its conclusion. Page says it gave the track its signature intensity and feel the longer you listened to it. As for the lyrical composition, Page credits frontman Robert Plant for laying it down on the spot. “Robert was magnificent with his input of lyrics to the music of Led Zeppelin, anyway. This was during a period where we were at Headley Grange, that the thing was put together. It was slightly complicated to be doing this whole thing without a vocal, because at the time there weren’t any lyrics, and this was the backbone of  what the song was intended to be, and the whole of the running order from the beginning till the end was sort of mapped up,” Page told BBC.

“It was a tricky thing to do because there was a lot of music and changes in it. I remember during that period, Robert, he was sort of sitting down, leaning against the wall, and he was just sort of, writing. I’ll never forget that image of him doing that,” Page continues. “And then Robert comes up and starts to pitch in, and sing, and I tell you, 90 percent of the lyrics were already done.”

“What I’ve learned about John Bonham, that he could really be effective if he came in somewhere down the line on this song,” Page narrates about Bonham’s contribution to the legendary track.

Click the video below to watch the rest of the interview!