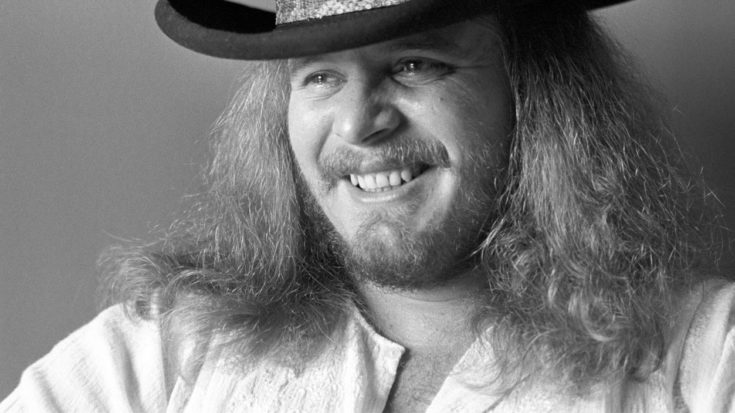 Today, we’re celebrating the life of rock legend Ronnie Van Zant, who would be 70 years old today. Born on this day in 1948, Van Zant rose to fame as the frontman of legendary Southern rock outfit Lynyrd Skynyrd and is by far one of the genre’s most legendary and intriguing figures. Older brother to current Lynyrd Skynyrd frontman Johnny Van Zant and 38 Special’s Donnie Van Zant, what began as road trips with proud papa Lacy and his brothers to the tune of Merle Haggard and Hank Williams turned into a glowing career and a legacy far beyond his wildest dreams.

Fiercely talented, fiercely driven, and fiercely missed, Ronnie’s legacy lives on four decades after his death at the age of 29 and on what would have been his 70th birthday, we celebrate his life by looking back on the 7 top reasons why he’ll always be Southern rock’s greatest hero.

He’s been called the everyman’s poet, capable of getting to the heart of the human condition by using his life growing up in a tightly knit family in Jacksonville, Florida as a frame of reference.

Ronnie’s tremendous ability to capture all of those moments and feelings we’ve all experienced – small town life, wanting to break free of your own backyard to see the world, sitting at your mama’s knee and hearing her whisper to you every dream she’s ever had for you – and commit them to paper is unmatched, crafting stories with a pearl of wisdom or two thrown in almost as if Ronnie was trying to give something back as payment for the legacy he was about to create.

Ronnie Van Zant was a lot of things.

A poet for the common man, fiercely determined in his pursuit of excellence, and one of the greatest frontmen to ever grace a stage – but at the end of the day, and most importantly, Ronnie was a family man, spending every moment not on the road or in the studio with the people he loved most at his home in Jacksonville.

His younger brother, current Lynyrd Skynyrd frontman Johnny Van Zant, looks back on Ronnie the family man and reveals that some of Ronnie’s most treasured moments came not from being onstage, but from kicking around his Jacksonville home with his family and spending as much time with the people he loved most in the world as humanly possible.

3. An Absolute Master Of The Stage…

At this point, it’s safe to say that there isn’t a frontman – past or present – who rivals Ronnie Van Zant when it came to the frenetic energy he brought to each and every performance. Known for taking the stage barefoot to connect with the energy beneath his feet, Ronnie had a remarkable gift for sucking you in, chewing you up and spitting you right back out during the course of the 90 or so minutes he had your full attention from his spot at the center of the stage and not only did you thank him for it, you lived for it.

The same ferocity and passion with which he attacked everything from baseball to Lynyrd Skynyrd rehearsals came through in full force night after night, striking fear into the hearts of every frontman forced to take the stage after Lynyrd Skynyrd. If that’s not a legacy to hang your hat on, I don’t know what is!

4. …And At Bringing Out The Best In Everyone

I would imagine that disappointing Ronnie Van Zant felt a lot like disappointing your parents. A man who consistently put his blood, sweat, and tears into all that he went after, Ronnie had a way of bringing out the best in everyone and inspiring them to reach not just for the stars, but the entire universe; in Ronnie’s eyes, who were you to deprive the world of your gifts and talents by giving life anything less than everything you’ve got?

Whether it was grueling practice sessions at Lynyrd Skynyrd’s famed Hell House or constantly finding new and exciting ways to take his career and those of his friends and bandmates to the next level, Ronnie Van Zant was a mirror that reflected the very best you had within you and brought it out into the spotlight for all to see.

5. Lacy And Marion’s Son Above All Else

He was a rockstar, a poet for the everyday man, and a rock and roll legend – but at the end of the day, at his very core Ronnie Van Zant was and would always be the oldest son of Lacy and Marion Van Zant, something he took more pride in than any manufactured title you could bestow upon him.

His impossible work ethic stemmed from watching his father Lacy work from sun up to sundown to provide for his wife and six children. His ability to nurture talent and bring out the best in those he felt himself responsible for, a result of watching his mother Marion successfully raise a family of respectful, responsible men and women who looked out for themselves and each other. Ronnie never hesitated to give his siblings anything and everything he had if they asked for it and throughout his life worked tirelessly to be a father, son, and brother that the Van Zants could be proud of – and succeeded in spades.

6. His Fierce, Unrelenting Dedication To Excellence

The pursuit of excellence wasn’t a weekend job for Ronnie – it was a way of life. Band practices went on for hours on end in the unrelenting heat of Hell House until Ronnie was sure that Lynyrd Skynyrd could play their material from front to back the same way each time, every drum fill and guitar lick able to be reproduced on a whim to ensure that what fans heard at their shows was identical to what they heard on albums and AM radio.

If lyrics flashed into Ronnie’s brain one moment and were gone the next, they weren’t worth being committed to paper in the first place and no song was ever good enough to be laid down in one take – there was always something that could be done to make Lynyrd Skynyrd and himself better, faster, stronger, more efficient. No matter what it was, you could always count on Ronnie to lead from the front and yell, “Follow me!”

7. The Legacy He Passed On

Any other band born from the vision of any other man would have faded into obscurity and remained nothing more than a tragic myth in the rock and roll pantheon – but not Lynyrd Skynyrd. Not today, not ever. A decade after Ronnie’s passing, they re-emerged; revitalized, rejuvenated, and ready to carry the torch and continue the legacy forged by their friend and brother on a dusty Jacksonville baseball diamond two decades earlier.

With Ronnie’s own younger brother Johnny at the helm, Lynyrd Skynyrd resumed their rightful place on their throne as the kings of Southern rock and for the past 30 years have made it their business to ensure that the world never forgets what they set out to do: bring you the most seriously rockin’ Southern rock you’ve ever heard!