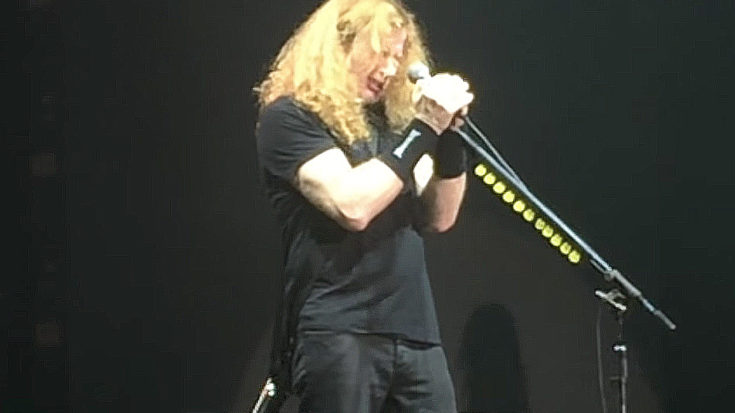 “I Don’t Even Know What Else To Say…”

Chris Cornell’s death this year at the age of 52 has thrown the rock world into a tailspin as friends across the musical spectrum struggle to accept the reality that is a world without the Soundgarden singer. Where some took to social media to express their shock and grief, others, like Megadeth frontman Dave Mustaine, found themselves at a loss for words and instead turned to music to convey the loss felt in the wake of Cornell’s passing. Last night’s Megadeth show in Tokyo found a visibly devastated Mustaine addressing the audience with the news that Cornell had died, seemingly at a loss for words as he struggled to make sense of it all:

“Chris Cornell, a friend of mine, a friend of all of us from Soundgarden, died today and we have lost one of the most beautiful voices in rock and in history.

And I don’t even know what to say other than we’re gonna dedicate this next song to you, our friends in Tokyo, ’cause we’re here with you and we love you so much and we wanna celebrate Chris’s life today.”

Then, with the disclaimer that he doesn’t sing like Chris and “could never sing like Chris,” Mustaine led his band and the audience on an emotionally charged cover of Soundgarden’s “Outshined,” the crown jewel of the band’s critically acclaimed 1991 album Badmotorfinger. Whether or not you like Megadeth or Dave Mustaine is of no consequence – what makes this performance so incredible is the fact that these are grown men visibly struggling with the loss of a dear friend and channeling their pain into the only medium they know: song.

Wherever Chris Cornell is, we hope he knows how loved and respected he was – this cover is only a glimpse into the impact he left on the world.