Guitar Riff Off: Steve Howe vs. Eddie Van Halen – Who do you choose? 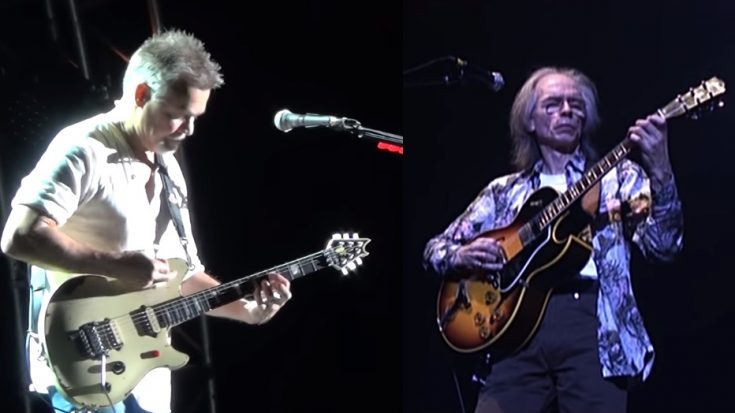 We’re pitting two of the most prolific guitar meisters in a battle of a riff showdown. On the blue corner is Yes’ resident stylistic guitarist Steve Howe, who is known for his eclectic influences, straying away from the standard rock format for more obscure classical and jazz choices, expertly crafting them for the band’s distinct sound to surface. On the red corner, is Van Halen’s very own guitar hero Eddie Van Halen, known for his light-bending speed, technical mastery, and an authentic playing emotion that’s always intact in his performances.

For Steve Howe’s representation, we pull out “Machine Messiah”, “Awaken”, and “I’ve Seen All Good People”, while Eddie Van Halen has “Unchained”, “China Town”, and “Runnin’ With The Devil” vying for him. Howe’s flexibility shows with the three tracks mentioned, from a progressive, highly-undulating clockwork masterpiece to a country-driven ramble that shows hints of classical influence all throughout. Meanwhile, Van Halen’s own catalog feature a blistering-paced showmanship, with some moderate nods to feel and emotion when doing tasteful bends and dive bombs on these tracks. Eddie’s tried-and-tested formula works well everytime, but Steve has the edge in terms of taste and implementation of several melodic techniques into one song.

Comparing their styles maybe apples to oranges, but at the end of the day, it’s the inherent feel and emotion conveyed of the guitarist’s composition that matters. If you were to choose, who wrote and delivered better riffs and solos? Head to the comments and let us know!