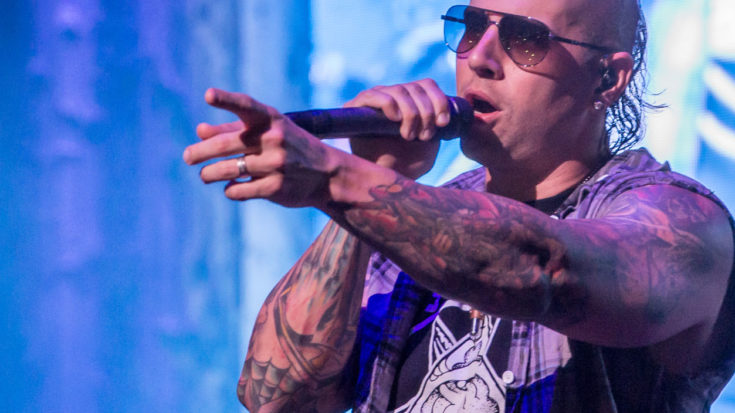 Imagine working your tail off for the better part of two decades, surviving the crushing loss of your bandmate and breaking through to the other side with your very first Grammy nomination…only to find out that the Grammy Awards don’t actually plan on telecasting the category you’re up for?

That’s the situation Huntington Beach, California rockers Avenged Sevenfold found themselves in this week after it was revealed that this weekend’s Grammy Awards will not be telecasting the ‘Best Rock Song’ category, the category for which the first-time Grammy nominees are up. Their 2016 epic “The Stage” is up against Metallica’s “Atlas, Rise!,” K. Flay’s “Blood In The Cut,” Nothing More’s “Go To War,” and Foo Fighters’ “Run,” but regardless of who actually takes home the Grammy Sunday night, Avenged Sevenfold won’t be there, says frontman M. Shadows.

“Honored,” he said when asked by a fan on Twitter how it felt to be nominated for a Grammy. “Unfortunately they have taken “Best Rock Song” off the telecast this year so we won’t be attending. Maybe next time,” finished Shadows before offering well wishes to all else in attendance Sunday night.

Honored. Unfortunately they have taken "Best Rock Song" off the telecast this year so we won't be attending. Maybe next time. https://t.co/GIotEyLCuK

Thank you so much for the questions, and an even bigger thank you to all who have come out on this tour. Good Luck to the nominees on Sunday. Regardless of the outcome, we want to thank each and every fan for their continued support. We hope to see you all soon. M #GRAMMYsAskA7X

Frankly, we don’t blame Avenged Sevenfold – and we’re not surprised. Last year’s various Grammy night flubs, paired with years of rock and metal acts not getting a second of televised airtime despite their various wins and nominations prompted Shadows to weigh in on the matter, saying that “literally no one’s gonna see those bands or know that they’re nominated, and that’s an issue. I think it needs to be on TV.”

“My whole thing was that metal… if you’re getting the ‘metal’ award, they don’t actually televise it, so no one sees it — it doesn’t move the needle at all. And I think that’s what the Grammys have to get right. When you look at metal, it’s probably one of the healthiest genres when you look at it in a worldwide perspective — every single country listens to metal. And whether it’s mainstream or not, it’s irrelevant. People will watch your program if you’re giving awards to bands that deserve it and it’s actually on TV, and it helps those bands push the needle forward.”

Whether it’s Metallica and their performance being thwarted by ‘technical difficulties,’ Megadeth walking onstage to accept their Grammy as the wrong band’s music plays, or a band’s hard earned accomplishments not being televised, the way rock and metal are treated at the Grammy Awards is pretty shameful, no matter how you slice it. I don’t care how cool you are – every band wants to be recognized for the work they’ve put into doing what they love and when they’re not taken as seriously as more mainstream acts, it’s a bit disheartening.

We’re bummed to know that Avenged Sevenfold won’t be in the house Sunday night for their first Grammy nomination, but we understand. Best of luck to them and the four other amazing acts they’re up against – when rock wins, we all win!