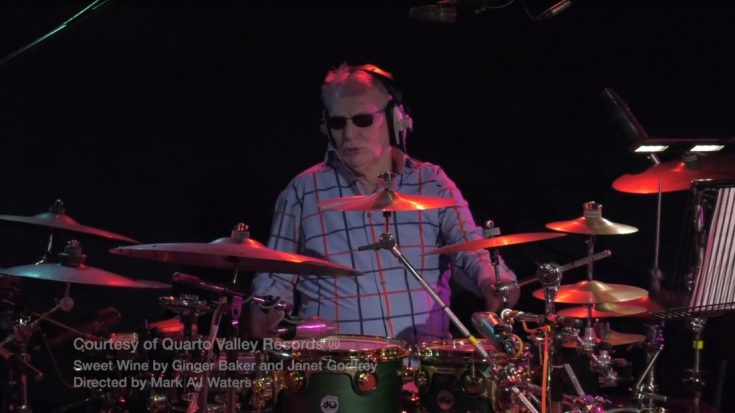 A video clip of one of the final sessions of ex-Cream drummer, the late Ginger Baker, has recently surfaced. Baker was in the midst of recording a tribute album from the super trio’s ’60s material, titled Cream Acoustic, before he passed away in October.

Cream Acoustic was spearheaded by Cream lyricist Pete Brown and the QVR Record label, featuring various artist appearances such as ex-bandmate Jack Bruce’s own son Malcolm, Joe Bonamassa, Bernie Marsden, and Maggie Bell, among others. The album is set for release early next year in various audio and video formats.

Kofi, Baker’s son, has said that the two had managed to bury the hatchet before the drummer’s passing, saying, “I used to say to my girlfriend, ‘When he dies, I’m going to feel nothing’. I really didn’t think I’d feel anything. The asshole had to open up to me right before he died. I think if he’d stayed an asshole to me, maybe it would be easier. But I didn’t think it would affect me the way it affected me.”

Kofi said he sat alongside him in silence at first, then thought, “‘What the fuck? I’ve got all this stuff I want to tell him.’ … I said to him, ‘Hey, I’m learning ‘Blue Condition’ and I’m doing your stuff. … Dad, I’m carrying on. I’m keeping everything you taught me, all the secrets and everything. I’m going to keep it going as well as I can now.’ And he just smiled, and it was just amazing. …  I think he knew he was going to die, and I think he relaxed at the fact that he could be himself. He just dropped that hard exterior. … Underneath all that temper and stuff, I thought he was a really loving person.”