Finally, A Rapper Who Actually Has Talent And Can Shred On Guitar 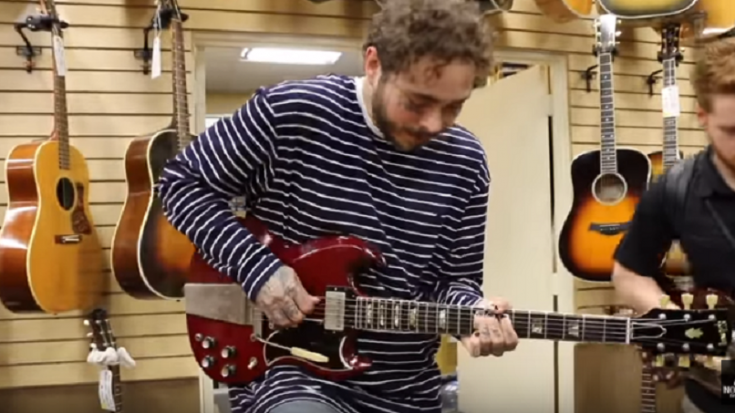 Lil Wayne needs to take notes. This is how you do it.

We know Post Malone because of his big hits but he’s actually more than just another rapper – he’s a pretty talented musician too. Just look at this video and see him shop for guitars, you’ll be blown away. But the thing is, not only does he know how to shred, he also has a background in classic rock, metal and blues!

He grew up in Grapevine, Texas with parents who are music lovers and so it’s no surprise that some of his biggest influences are old-time rockstars.

“From my mom putting me on Johnny Cash and Hank Senior, and from my dad putting me on Biggie and Metallica, they all inspired me to make music. Kurt [Cobain] and John [Lennon], too, just really inspired me to go for it. Don’t be scared of what people think and just get weird with it.” – Post Malone

His father, Rich Post, once shared in an interview that he “was a heavy metal, hair band kind of guy.” So Post Malone grew up listening to sounds from Billy Idol, Twisted Sister, Bruce Springsteen, Bon Jovi, Motley Crue, Prince and AC/DC.

Post Malone even sampled Fleetwood Mac’s classic tune “Dreams.” Even during his concerts, he would sometimes perform his cover versions Nirvana and Bob Dylan songs. He taught himself how to play the guitar and he rocked out to Metallica when he was only 12.

“I feel like it’s really just like when I was younger. You know, my dad put me on everything. From metal to hip-hop, and my mom put me on country. I think it’s just important to remember that music in my brain is not one genre and I don’t think it should be put into genres. I think you should listen to what you like and who cares what genre it is. If you like it, then rock with it.” – Post Malone

Whether you like his music or not, it’s undeniable that Post Malone knows his classic rock very well.