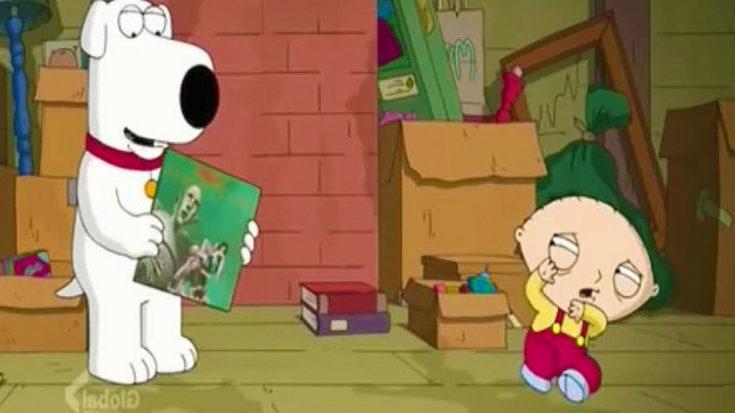 Released in 1977, Queen’s sixth album News of the World gave us “We Will Rock You” and “We Are the Champions” – but it also gave us a really unsettling album cover which, if we’re going to be honest, is the stuff of nightmares.

Oh come on, you know that giant sad robot clutching the broken, bleeding bodies of Freddie Mercury, Brian May, John Deacon and Roger Taylor in its cold dead hands makes you more than a little uncomfortable, but rest easy: you’re not the only ones. A 2016 episode of hit animated series Family Guy showcased the horror of the News of the World album art as baby Stewie Griffin spends the better part of 30 minutes absolutely terrified by the album after family pet Brian unearths it while clearing out the attic, scared to death by well placed, well timed gags at his expense.

Fun Fact: The album’s cover was a painting by American sci-fi artist Frank Kelly Freas. Taylor had an issue of Astounding Science Fiction whose cover art depicted a giant intelligent robot holding the dead body of a man. The caption read: “Please… fix it, Daddy?” to illustrate the story “The Gulf Between” by Tom Godwin.

From gas station lotto scratchers with the art on it to a giant wall mural in his nursery, it’s non stop hilarity and horror (“God, why does he look SAD?! He’s already destroyed humanity, what else could he want?!”) for those who remember avoiding the hell out of the album cover as kids. It’s not all jumpscares and childhood terror revisited, though – this episode of Family Guy has a pretty funny, pretty solid ending that features the album’s robot in a kinder, gentler light.