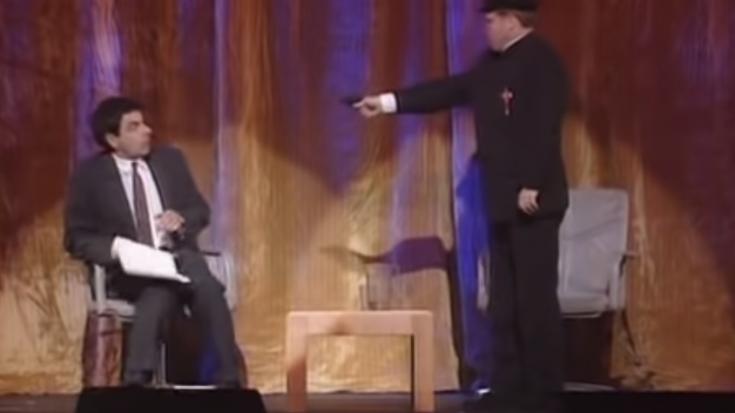 What A Good Sport

The two Brits joined together to bring awareness to HIV/AIDS research in 1991. Elton John sat across from Comedian Rowan Atkinson for what was to be a hilarious stupor of questions. There was apparently some sort of prior arrangement. Elton was obviously stifling some serious urges to laugh. But the gist was that he appear completely unimpressed and annoyed by Atkinson.

The comedian began by asking the singer questions about his moniker. Atkinson brought up Elton’s self titled album, Elton John (1970). “You didn’t feel that people might say, ‘wait a minute, they mean John Elton’?” asked the comic. Elton stared at Atkinson with cheer behind his eyes but a completely serious face- completely annoyed.

Rowan Atkinson, also known as Mr.Bean, continues to talk about older songs. He brings up “Your Song.” In regards to the lyric in the track, “…you see I’ve forgotten if they’re green or they’re blue,” Atkinson asks, “is it this sort of chronic forgetfulness that led you to forget that Elton is not in fact a Christian name at all- it is a surname and not a very attractive one at that?”  Elton glances to the crowd, trying to cover his mouth of laughter. “Let’s talk about something else,” says the singer.

They go on to  talk about the similar relevance of Marylin Monroe’s name. The audience is roaring with laughter at this point. Elton John dutifully follows the script of not expressing any reaction but annoyance. After Atkinson asks his final question about whether or not his success is correlated to his “stupid pointless bloody name,” Elton pulls out a prop gun and yells, “Bang!” Atkinson falls to the floor and Elton finally smiles.