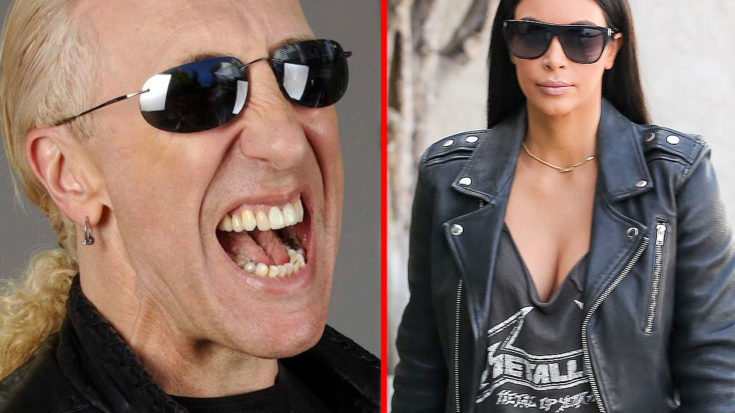 Kim Kardashian. Kanye West. Gigi Hadid. Jaden Smith. They’ve all got one thing in common, and it annoys the living daylights out of rock fans: wearing band t-shirts in a trendy, ironic fashion. I don’t even mean the regular, run of the mill Beatles or Rolling Stones gear you can snag at your local WalMart for $14 – I’m talking Metallica, Iron Maiden and Exodus t-shirts seen on celebrities who I’d bet my bottom dollar couldn’t name a single song belonging to the band whose shirt they’re rocking, much less classify themselves as anything even remotely resembling a fan.

While it annoys me a little, it doesn’t keep me up at night. In fact, I’m pretty grateful for the new generation of fans who might be birthed by the sight of their favorite reality TV star rocking a cool band shirt; but Twisted Sister frontman Dee Snider feels differently, taking to social media to air his frustration with this new trend of co-opting music genres for fashion purposes and taking to task the usual suspects, sparking a pretty solid debate as to who these bands belong to and if it’s really fair to assume that the Kardashians and Jenners of the world could be anything other than closet metal fans.

It's not just the wearing of our metal T's, it's their cherry picking of our style #skulls #metalhorns These are OUR symbols; OUR image.

Our style and appearance is NOT ironic or a gimmick. This is our way of LIFE! And it’s extremely disrespectful to treat it as a commodity.

Yeah, I'm sure the Jenner sisters listen to a lot of Slayer. They profited off iconic metal bands because they love and respect metal.

To me being into metal is a lifestyle. To me it's like being in a club or a gang. Nobody is allowed in unless you like the same thing.

Others differed, offering up some pretty solid points:

Maybe it takes a kid liking a t-shirt to start a convo about said band and kid is opened up to a new world of music they might not have.

How can you tell someone is a non-metal fan? My parents are huge fans of yours,I grew up on Twisted Sister&love metal-but they don't look it

Doesn't bother me. Metal is in trouble and if Rihanna gets 1 kid to listen to Priest or Maiden even out of curiosity I say it's a win.

But what if a Kardashian wears a TS shirt and it makes a fan curious and she goes out and listens to them. That's a good thing, right?

At the end of the day, it’s just a shirt. It’s just a shirt and non-fans wearing them doesn’t take away from the legitimacy or sheer awesomeness of the bands displayed. If it inspires some kid to head over to iTunes and check out a Motörhead song that isn’t “Ace of Spades,” I call it a win for everyone; besides, isn’t music more fun when you can share it with people who ordinarily wouldn’t check it out for themselves?