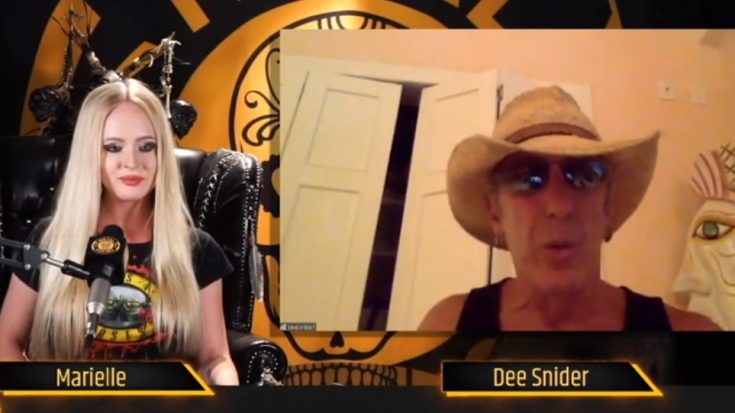 Dee Snider of Twisted Sister says he’s gearing up to direct a new horror movie derived from a script he wrote, which is titled My Enemy’s Enemy.

This movie is just one of the two films he’s committed to direct in the coming months. My Enemy’s Enemy is based on a real-life crime spree that happened in Snider’s native Long Island locality in 1992. Theses consecutive projects follow 1998’s Strangeland, which he wrote as well.

In an interview with Metal Casino, Snider said, “My Enemy’s Enemy is powerfully disturbing. People said to me, after Strangeland, why didn’t I do something else? …I didn’t have an idea; I didn’t wanna just do something typical.” He recalled a “crime committed where I grew up on Long Island in 1982. It’s considered the most horrible of crimes in the history of the area where I grew up. Each of the people convicted got 365 years in prison — each — for the crime.”

While Snider didn’t state the actual event he referenced, it is highly possible that he was talking about a certain May 1982 spree where five young men entered three separate Long Island locations and committed sexual assault and theft to over a hundred people or so. The group was eventually convicted of 817 criminal counts.

“My Enemy’s Enemy is about, Can we join each other, when we’re enemies, to fight a greater enemy? If you’ve just had horrible things done to you by people … could you work with them to fight somebody who was even more horrible? So, it’s based on a true story, but then I just went with what I call the X factor and go into fantasy world. … I think people are gonna be very disturbed, but they’re gonna enjoy it,” Snider expounded.

As for the second project, Snider said that it was a rewrite of an ’80s cult classic that he might direct. He also shared about how he sent his first novel to a publisher and was awaiting developments for his future endeavors in the field.