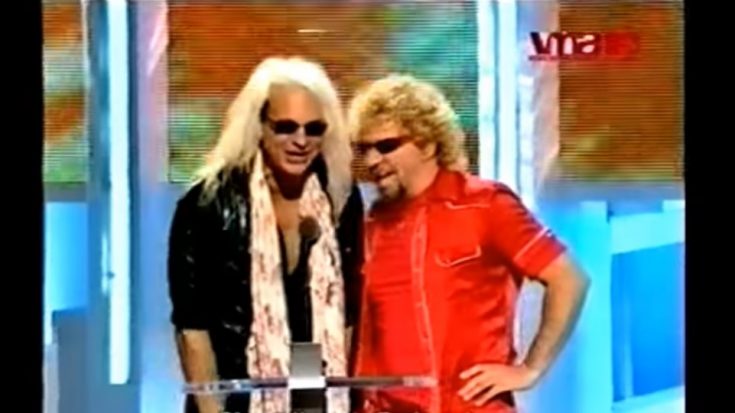 Known for his cartoon and comic-making hobby, Diamond Dave tweeted an image of a detailed drawing that took the form of a newspaper called “The Daily Catastrophe”. The headlines of the newspaper make references to his replacement Van Halen frontman, reading: “Concrete Flowers for Sam,” “Sam the Man Not Only Will Be Giving His Life for Rock and Roll, But Plans to Be Buried in His Recently Acquired Jet!,” “Red Rocker Refuses to Fly 55 in Afterlife,” and “Soggy Kudos to the Bottom’s Favorite Front-Guy for Planning Ahead.”

Hagar took the place of Roth in the band in 1985 and stayed in the lineup for 11 years. It can be noted that the two Van Halen singers toured together at one time in 2002, performing for a 21-date string of shows. They played alternating headline shows, however, never sharing the stage at any point, disappointing fans who attended.

After Eddie Van Halen’s passing in October, Hagar paid tribute to him by performing two songs they wrote together, “Right Now” and “Good Enough”, during his Birthday Bash. He also revealed recently that he was on board for the Van Halen Kitchen Sink Tour, which would’ve brought the band’s past and current members together on one stage. “It was totally on my radar. No one had confirmed any of it, but it was obviously what was going to happen,” he shared to Sirius XM’s Eddie Trunk.

Roth dedicated a new solo song to Eddie, titled “Somewhere Over the Rainbow Bar and Grill”, along with a photo of his former bandmates in a tweet. The track was included in a recent webcomic, The Roth Project, among other songs.