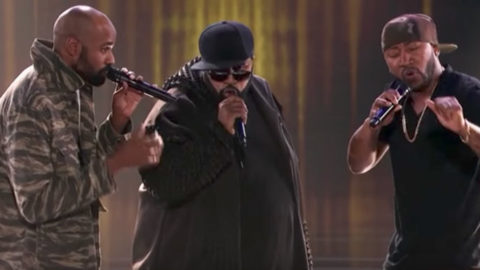 What Do You Think?

Well, there’s no doubt that Free Bird is one of the most iconic Skynyrd songs ever. You know you’ve drunkenly yelled the words at a rock concert in a middle of a guitar solo. Admit it. It’s okay, we’ve all done it. But what happens when someone or a group totally rearranges one of your favorite songs? Some say you should never touch a classic like this, some are more open to hearing how others interpret it themselves. One thing is for sure, you’re probably going to love or hate this version of it.

It’s no secret that singing shows bring tons of different talent and different perspectives of songs to millions of people around the world. That’s the beauty of contestant shows like this.

This particular group turned Free Bird into an R&B song. Yes, that’s right. We’re talking about the opposite of Southern Rock here. No twang in the belting, no steel guitar. This is soul. You know what? It actually works. That’s just testament to how great this song was originally written. When you’re able to crossover into a different genre and it still sounds good.