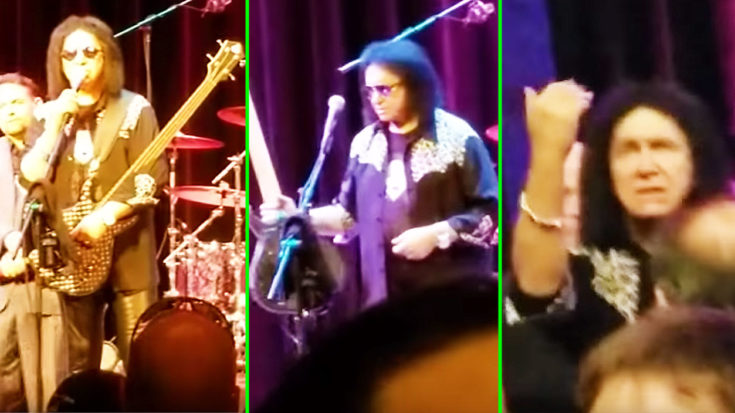 Throughout his career, Gene Simmons has gotten into some controversial issues from time to time. From his struggles in his personal life, to the struggles he faced with members of KISS, Gene has always been under the microscope of controversy, and his latest action will probably stir some more.

Gene and his band were playing an event in East Providence City. The event was hosted by the city councilman, who was presenting Gene with a key to the city. During the councilman’s speech, a man (who was identified as Josh Martin) from the upper balcony started to heckle Gene and the councilmen. He was yelling expletives, and things like, “Shut up and play your guitar,” “I didn’t pay to see a politician,” and “Ace [Frehley] is better than this!” He was ruthless, and Gene, who couldn’t take it anymore, grabbed the mic picked him out in the crowd, and left the stage to confront him in the lobby.

The video does not follow Gene into the lobby, but witnesses are saying they two got into a verbal confrontation, and Martin was high and reeked of marijuana. Gene returned to the stage after the confrontation and returned to playing the show.

Check out the footage we have down below!