“I Can’t Make You Love Me” Stuns As Bonnie Raitt Channels Heartbreak, Grief At Grammys 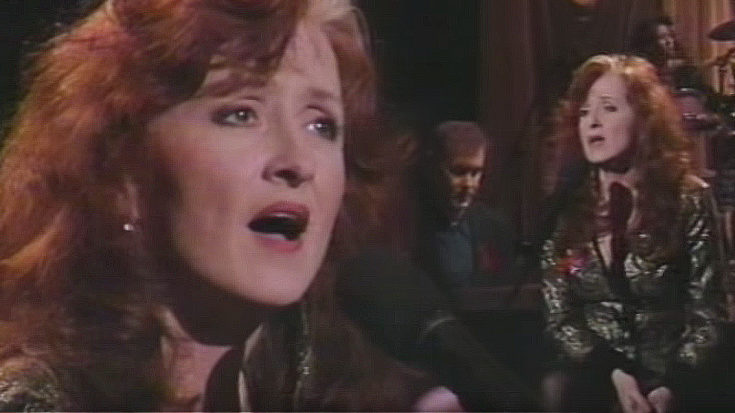 Written in 1990 by country music songwriting giants Mike Reid and Allen Shamblin, 1991’s smash hit “I Can’t Make You Love Me” became one of Bonnie Raitt’s most successful singles to date, hailed universally by critics for the audible ache in her voice as she details the heartbreak of being the loser in a one-sided relationship. Featured on Raitt’s Grammy Award winning album Luck Of The Draw, “I Can’t Make You Love Me” may not have taken home a Grammy at the 1992 Grammy Awards, but it definitely stole the show when Bonnie took the stage that night with piano accompanist Bruce Hornsby and for nearly 5 minutes rendered an audience full of musicians, songwriters and industry professionals silent.

Sitting on a stool beside the piano and bathed in spotlight, Bonnie’s pain is real and it’s up close and personal for the entire world to see, finally giving a face to what Steve Hochman of Los Angeles Times hailed the song as “one of Raitt’s most elegant tracks” in a performance that wowed with both its quiet, austere setting and emotionally charged subject matter.

Fun Fact: “I Can’t Make You Love Me” almost didn’t go to Bonnie! According to Reid and Shamblin, Bonnie’s biggest hit very nearly could have gone to Bette Midler or Linda Ronstadt.

While Grammy Award winners Bette Midler and Linda Ronstadt would have been stunning on this song, no one quite captures the pain of “I Can’t Make You Love Me” quite like first lady of the blues, Bonnie Raitt. Don’t take our word for it though – check out Bonnie’s finest vocal performance ever in the footage below!