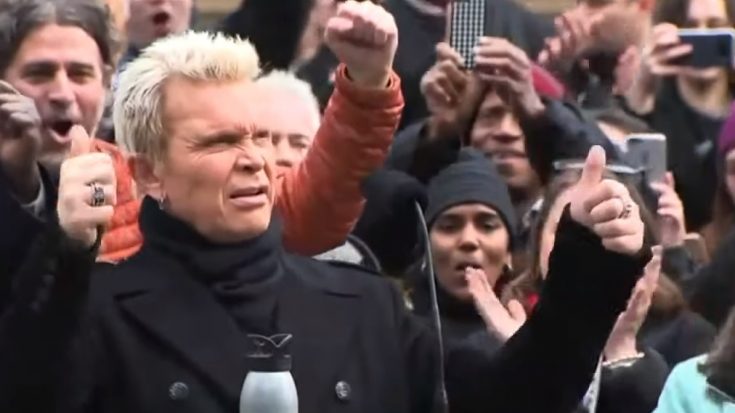 Punk icon Billy Idol is the new face of an environmental awareness program of New York City, with officials utilizing the play on words on the tagline, “Billy never idles. Neither should you.”

Idol himself said that he was happy to be an instrument in drawing attention to the often-overlooked air pollution caused by idling vehicles. In an interview with Rolling Stone, he said, “There was a lady in the D.E.P. here in New York who was a fan. The mayor’s a fan. But I think it was the I-D-L-E and I-D-O-L that sparked the idea that we could have fun with that and at the same time make an important statement for New York and its healthy climate. This city really means a lot to me, and the idea that I could give back in some way for such a good cause, it was such a great idea. Obviously, the air quality [in New York] is loads better than it was when I lived here, but car idling is a major contributor to air pollution and that’s just not healthy.”

During the event’s launch, Idol’s “Eyes Without a Face” and “White Wedding” was played on the direction of Mayor Bill de Blasio. Idol responded with, “It was fun when he said it was a ‘nice day to start again.’ You can always have a fresh start.” He was also amazed that a politician quoted him, which didn’t happen often. “It’s kind of fantastic,” he exclaimed.

Idol will be featured on multiple media platforms to encourage New Yorkers to shoot phone videos of any vehicle spotted idling in the streets. Video owners will receive a 25% reward for the resulting fine if their footage results in a successful prosecution.