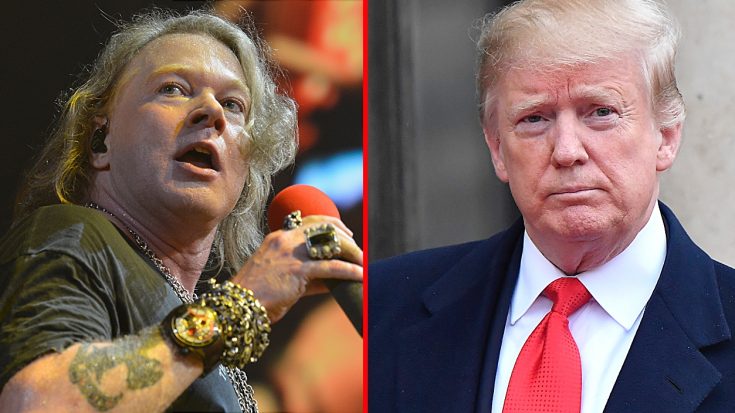 Seriously, Can’t We All Just Get Along!?!

At this point, it’s just no surprise that most rock legends are not fond of President Trump. It seems as though no matter what Trump says or tweets, someone from the world of rock & roll will be there to immediately jump on him. And to go with that, Guns N’ Roses frontman Axl Rose is arguably the most critical of them all towards the President. So much so that Axl’s entire Twitter account has, for the most part, been dedicated to all things anti-Trump.

This time around, once again is no different. Unfortunately, it’s regarding a very, very serious subject, and that’s the wildfires in California.

There is no reason for these massive, deadly and costly forest fires in California except that forest management is so poor. Billions of dollars are given each year, with so many lives lost, all because of gross mismanagement of the forests. Remedy now, or no more Fed payments!

Just a few days ago, President Trump put out this controversial tweet that, as you’d expect, got mixed reactions. And, as you’d guess, Axl was one of the first to jump on this offering his own response that included some not-so-nice words…

Um…actually…it’s a lack of federal funding that’s at the “root” of the purported forest mismanagement. Only a demented n’ truly pathetic individual would twist that around n’ use a tragedy to once again misrepresent facts for attempted public/political gain at other’s expense

It was actually just a few weeks ago that Axl was going at the President on Twitter, only that time it was for using a Guns N’ Roses song at a rally without permission from the band. It comes as no surprise that Axl Rose, on both occasions, got VERY mixed reactions as well.

Nevertheless, if you ask me, there’s a time and place for everything to be said, and amidst all this chaos, I sincerely hope that California will not have to suffer from these fires any longer and that we can all come together in this scary time.

Please consider donating to help all of those affected by these terrible fires by clicking here.