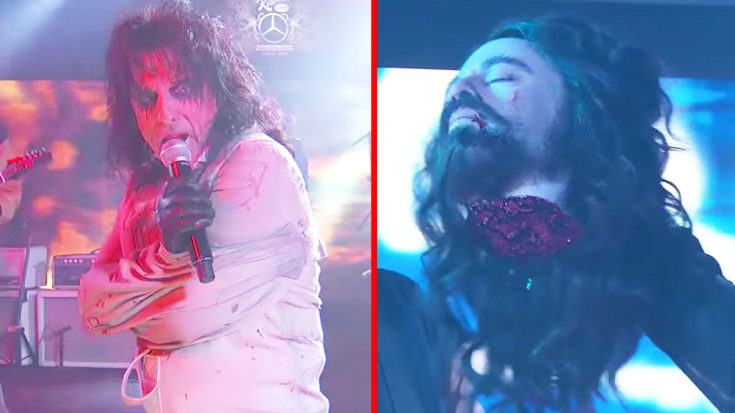 Halloween night was a crazy one on the Jimmy Kimmel Live!, show. Jimmy Kimmel has been out for the week to be with his newborn son, who is undergoing his second open-heart surgery, so he’s handed over the reigns to a few different celebrities who will be filling in for him throughout the week. Monday night, Shaq took over the show, but on Tuesday, which happened to be Halloween night, Dave Grohl guest hosted the show, and things got pretty crazy!

One of the special guests on the program was Alice Cooper, who was on the show to promote his newly released album Paranormal. Dave, dressed in costume as David Letterman, interviewed Alice about the new project, then invited him on stage to play a few songs and jam with the Foo Fighters. Alice turned in a wild performance of his two songs “Ballad of Dwight Fry” and “Killer,” and his performance ended with a grand finale no one will forget! Alice puts his head under a guillotine, and a woman in a black hood releases the blade to mimic him getting his head cut off. But when they pull the head out of the box, it’s Dave Grohl’s! It’s insane and you have to watch it!

Check out the clip down below and let us know what you think!