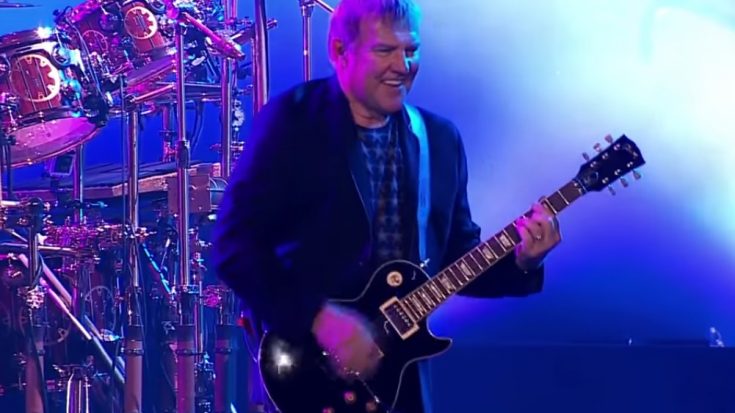 If there’s one guitar brand that Alex Lifeson loved the most in this world, it’s Gibson guitars. Inside the band Ruh, Lifeson is also a talented artist, sometimes contributing to backing vocals, mandolin, and bass pedal synthesizers. But growing up, he’d always been a fan of playing the guitar – and his band Rush helped him establish a reputation for it.

In a promotional video by Gibson, the Canadian rocker how he fell in love with playing a six-stringed instrument, as well as when he first got one. “The first guitar I got was an acoustic guitar,” Lifeson said. “It was a cheap Japanese guitar. It was $10 and I got it for Christmas in 1966. I played that guitar that whole year, as painful as it was – the action on it was terrible.”

The pain and suffering he endured getting callouses from that Japanese guitar weren’t worth it in a long run, so he decided to ask for a new one – which he got during Christmas. The guitar in question is also Japanese guitar, nicknamed “Canora.” Lifeson always wanted to own a Gibson during those years. “I played it as much as I could but I always dreamt about having a Gibson. They just seemed so beautiful and so out of reach,” he added.

Gibson was always been a lifelong dream instrument of Alex, and when the timing became right, he ordered a Gibson-355 in White in 1976, which became the musician’s signature guitar. To make things even greater, Gibson also collaborated with Lifeson to develop the Axcess Les Paul Alex Lifeson model, made to fit a king like him.

You can watch the promotional video below.