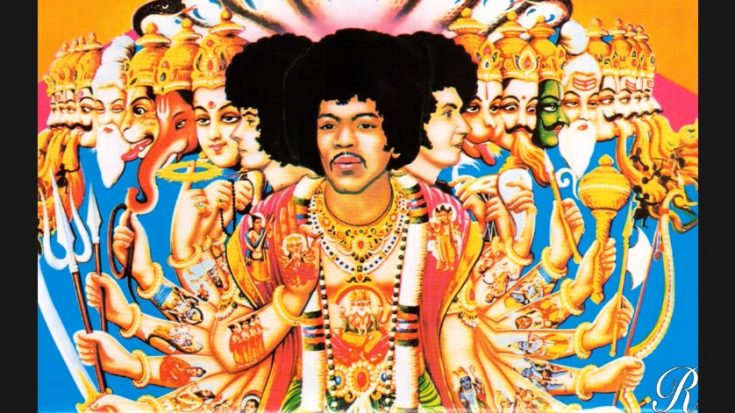 The second out of the three releases by the guitar deity Jimi Hendrix, Axis: Bold As Love saw the three-part band dive into deeper territory in terms of songwriting, veering away from the easy pace of Are You Experienced’s genetic makeup. The result was a complex body of work that one wouldn’t expect given the tight timings of Hendrix’s contract obligations, introducing the masses to some downright dirty psychedelic tunes.

The album opens with “EXP”, a brief introduction that uses stereo panning and feedback on Hendrix’s guitar as it makes way for “Up from the Skies”, a spacey rocker that satisfyingly concludes the previous track. Then comes “Spanish Castle Magic”, which was inspired by a club outside Seattle where Hendrix frequented during his early years in music. “Wait Until Tomorrow” leans towards pop as Hendrix and Noel Redding trade guitar and bass chops. “Little Wing” features a bottled execution of its indulgent blues arrangement that’s made it the favorite of rockers to cover, while “If 6 was 9” really dug on the psychedelic sound due to its heavy use of effects.

“You Got Me Floatin'” opens the second side with an authentic rock feel, augmented by backing vocals from the members of The Move. Following it is “Castles Made Of Sand”, riding a melancholic arrangement and accompanied by philosophical lyrics, while “She’s So Fine” gives the album a Brit-pop flair. “One Rainy Wish” has Hendrix use a jazz guitar, while “Little Miss Lover” sports a muted Wah in the mix. Album closer “Bold As Love” proved to be a complicated task to record, having over twenty different takes and four varying endings before settling on one that had Mitch Mitchell do a short solo.

With the limited run of Hendrix’s album-making stint, Axis: Bold as Love remains to be one of the most treasured records in the history of rock music.