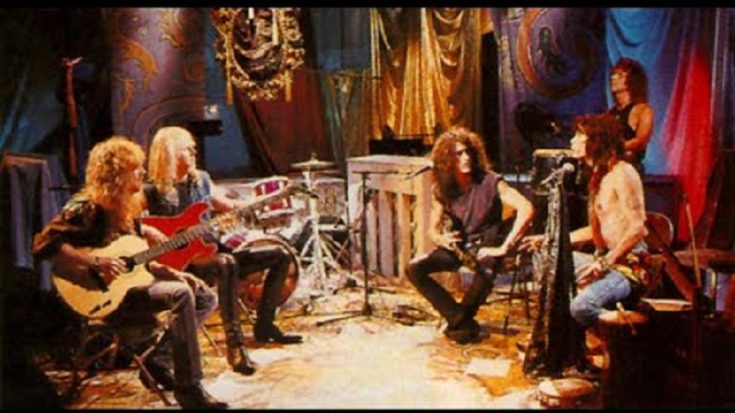 When it comes to live performances, Aerosmith has what it takes to dominate the stage. The American rockers consist of Steven Tyler (lead vocals), Joe Perry (guitar), Tom Hamilton (bass), Joey Kramer (drums), and Brad Whitford (guitar), and are sometimes referred to as the “bad boys from Boston,” which all makes sense if you know their reputation by heart.

At the start of a new decade (the 90s), Aerosmith was deemed as a power group once again, taking advantage of their newfound fame from their latest album Pump, and embarking on an extremely successful tour. After a string of scandals and commercial failures in the early 80s, this is definitely the win that they deserved.

To maximize their popularity more, they decided to book a gig on the ever-famous MTV Unplugged Television Series on MTV, which showcased themselves without the luxury of studio tricks; just pure talent and energy. The event was recorded live at the Ed Sullivan Studios, New York City, NY, USA, on August 11, 1990.

Starting the jam session in an awkward, yet humorous way, Aerosmith then displayed to everyone how much talent they are made of. The live setting proved the band’s ever-glowing greatness in rock, a key component to Aerosmith’s longevity inside the changing dynamics of our music scene.

The setlist was as follows:

“Monkey On My Back”

“Toys In The Attic”