9 Insane Moments From Ozzy’s Life That’ll Make You Say, ‘You’ve GOT To Be Kidding Me’ 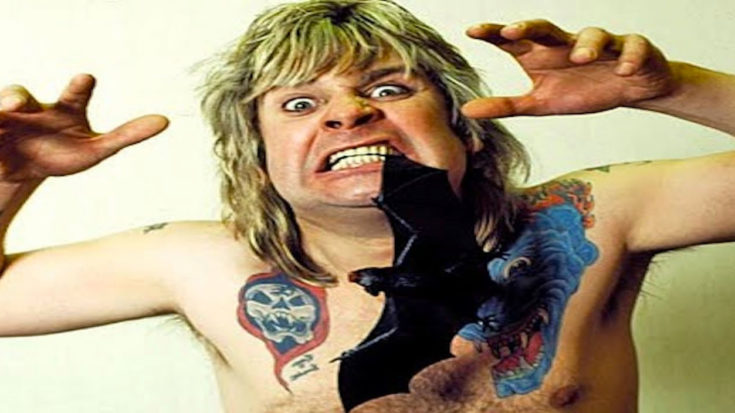 Never a stranger to his share of wild moments, Ozzy Osbourne’s had a pretty wild life. Whether it was some of the bizarre things he’s done while under the influence (what’s this we hear about trashing a hotel room with a dead shark?) or getting caught in the act of having an affair with his hairdresser in recent months, Ozzy’s been a great source of entertainment as we’ve been left shaking our heads in amazement and shock at some of his antics. Let’s take a look at 9 of his most outrageous moments that made us just ask, “Why?”

1. That Time Ozzy Went To Jail For Burglary

From Jailbird To Rock Legend

Before he was the Prince of Darkness, Ozzy was the Prince Of Thieves. The Black Sabbath singer did 6 weeks in jail as a youngster for petty burglary, and learned his lesson pretty quickly – after his father refused to bail him out.

This wouldn’t be the first or the last time Ozzy got a taste of life behind bars – he’d eventually spent the better part of the 1980s in and out of jail cells for incidents related to his intense battle with substance abuse, and while he’s had a pretty rough go of things lately, Ozzy’s done a pretty fair job of staying out of serious legal trouble for the past few decades.

It’s pretty well known by this point that Ozzy’s drug of choice was cocaine; during the early days of Black Sabbath, the band had a $75,000 coke budget and Ozzy remembers having the drug flown in by private plane.

By the 80s his habit had gotten so bad that it cost him both his spot in Black Sabbath and his marriage to his first wife Thelma, but it reached a fever pitch when while on tour in the 80’s with Mötley Crüe, Ozzy spent an entire night partying that ended with the singer actually snorting a line of ants after being told there was no more cocaine. Ants, y’all – we can’t make this stuff up.

3. That Time We Nearly Lost Him To A Quad Accident

Off The Rails On A Crazy…Quad

So I think it goes without saying that this might be one of the dumbest – not to mention dangerous – things Ozzy’s ever done. In 2003, Ozzy nearly lost his life when during a joyride around his lavish London estate, he was involved in an accident while riding his ATV.

Despite breaking his collarbone, several ribs and a vertebra in his neck, Ozzy recovered beautifully – and sold his collection of ATVs and quads shortly after. Whew – what a close call!

4. That Time Ozzy Trashed A Hotel Room…With A Dead Shark

As Rockstar As It Gets

I don’t know what it is about rockstars and tall tales involving fish (ahem…looking at you, Led Zeppelin), but something about creatures from the briny deep and hotel rooms attract rockstars like Ozzy, who trashed a hotel room with a dead shark, like moths to a flame.

A dead shark, you guys – again, yet another moment in Ozzy’s life that we couldn’t make up if we tried. If you were going to ask if drugs were involved in any way…yes. The answer is absolutely yes.

Ozzy and Sharon might be going through some serious marital problems in the wake of Ozzy’s infidelity, but they’re nothing compared to the time he actually tried to kill Sharon. In 1989 and during what Sharon calls a ‘hostile’ time in their 34 year marriage, Ozzy was under the influence when he came to the decision that she had to die – Sharon brushed it off before being choked nearly to death.

Thankfully, someone heard the kerfuffle and saved Sharon’s life, resulting in Ozzy spending some time behind bars. He later said, “I regret trying to kill Sharon. It wasn’t my plan to go out, get pissed, try to strangle her and wake up in jail.”

6. That Time Ozzy Bit The Head Off Of A Live Bat

Yep, He Officially Became ‘That Guy’

Animal lovers, you might want to shield your eyes from this one. In 1982, Ozzy became known around the world as “that guy who bit the head off of a live bat” when during a concert, a fan threw a bat onstage. Ozzy, thinking it was a toy bat, decided to be a bit silly and bite into the ‘toy’ bat’s head…only to realize in disgust and horror that it wasn’t a toy, but a living, breathing animal.

The crowd was understandably disturbed and Ozzy, who says to this very day that he still remembers how gross it felt and how shocked he was that it was real and later joked, “I got rabies shots for biting the head off a bat but that’s OK – the bat had to get Ozzy shots.”

7. That Time Ozzy Urinated On The Alamo

Well I mean…they did say to remember The Alamo, right? In the early 80s, Sharon hid his clothes to stop him sneaking out of the hotel in the middle of the night. Never one to admit defeat, Ozzy put on Sharon’s dress and after some wandering about, found himself urinating on The Alamo. In 2015, Ozzy formally apologized to the state of Texas for urinating on the icon of their independence.

That wouldn’t be the last time he couldn’t control his bodily functions in public, though…

8. Did We Mention That He Also Urinated On A Cop Car?

Seriously, Dude? You Couldn’t Hold It?

To be fair, the 80s was a pretty out of control decade for Ozzy, who by 1989 had bitten the head off of a live bat, tried to kill his wife, snorted ants and peed on a beloved national treasure. The insanity didn’t stop there: while on tour in Memphis, Tennessee, a drunk Ozzy was stumbling around and looking for a place to relieve himself when he opted for a white car parked inconspicuously nearby.

To his dismay, he discovered that the car was actually an unmarked police car…with the officer inside. Needless to say, this little stunt put Ozzy in jail for the night and left the officer who arrested him less than pleased.

9. That Time He Admitted To Being A Sex Addict

As If Anyone Was Surprised, But Still…

It’s been a rough year for Ozzy. He was caught having an affair with Hollywood hairstylist Michelle Pugh earlier this year and two weeks ago, Ozzy raised more than a few eyebrows when he attributed his string of affairs in recent years – including his 5 year affair with Pugh – to a battle with sex addiction that’s been going on for well over 6 years.

Now an outpatient undergoing treatment for his addiction, once Black Sabbath’s final tour wraps early next year, Ozzy will be going back to treatment as an inpatient for three months.