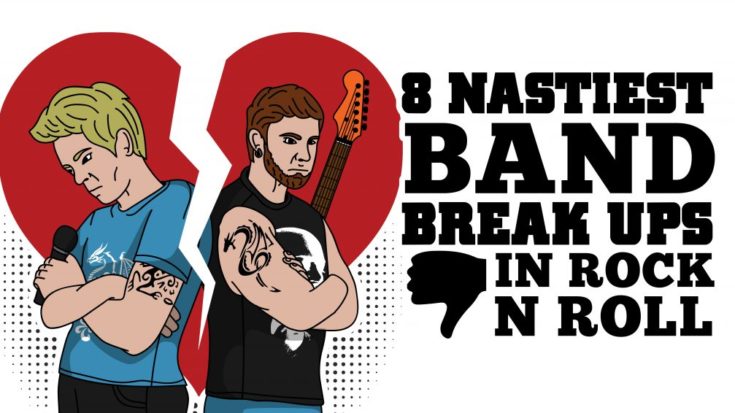 Rock stars live the big life and a big life also means big egos, big addictions, and big fights that usually result into a tradition of messy and ugly band break ups. Rock stars don’t write formal resignation letters when they quit. They walk out, and walk out with a bang…and with a frenzy of media coverage, lawsuits, and lots of shady hate towards each other that can even drag to decades. Majority of them just feel they’re just too popular not to ride solo.

Click through to discover  8  of the nastiest band break ups in the world of rock n’ roll.

A Sting In The Tail


They were three of the most desirable rock stars of the late 70s. With undying smashing hits like “Roxanne” and “Every Breath You Take”, nothing could stop the whirlwind popularity and success of The Police – well, except egos fist fights, and broken marriages caused by groupies.  As the band got bigger and bigger so did the tensions within the group. Guitarist Andy Summers states in his memoir “One Train Later” that they would fight during recording sessions and before going on stage in concerts, with some arguments turning into throwing of fists at each other. Frontman Sting affirms the disputes within the group by saying, “We didn’t have a great deal in common.”

While the band never really broke up formally, they did take a 25 year-long sabbatical break when Sting went on to pursue a solo career. The Police had little attempts at having a reunion doing a couple of gigs here and there throughout their “break” but didn’t really resolve their differences.

After firing and re-hiring original band members, endless musical disagreements, chaotic album recordings, and eventually feeling like sellouts, The Clash finally cut the crap (pun intended) and disbanded in 1986 after 10 years of being (forced to be) together.

When original drummer Terry Chimes left the band, he was replaced by Topper Headon who wrote the single “Rock the Casbah” that catapulted The Clash into superstardom. Ironically, as the single was climbing the charts, the band kicked Headon out because of his troublesome heroin addiction. In 1983, they re-hired original drummer Chimes who, after a year, left the band…AGAIN. The same year, guitarist Mick Jones was fired.

The remaining members of the band and their manager were constantly feuding through the production of their last album “Cut the Crap”, which, in hindsight, is being totally disowned by founding member Joe Strummer. Yikes.

The Eagles may have had a harmonious blend of voices together but the same does not go for their relationships with each other both personal and professional. In fact, in a nasty display of tensions within the band, guitarist Don Felder and singer Glenn Frey fought under their breaths on stage during a 1980 benefit concert in Long Beach, California for then- California Senator Alan Cranston. Years of suppressed enmity among each other exploded when Frey felt embarrassed and insulted after Felder responded to the Senator Cranston’s courtesies, “You’re welcome, Senator … I guess.”

Immediately after a backstage confrontation, they go onstage with Felder saying to Frey   “Only three more songs till I kick your ass, pal.” The volatile night ended with a smashed guitar and Frey quitting the band. “We always vowed to quit when we were still on top and that’s what we did.” Frey said.  Although the Eagles still toured and recorded throughout the years, it wasn’t until Glenn Frey’s death in June 2016 that the final dissolution of the band was announced.

Too young to handle?

Rock n’ roll cult favorite The Smiths had a short but highly successful run as a band from 1982 – 1987, producing four chart-topping studio albums. It was the friendship between vocalist Morrissey and guitarist Johnny Marr that was the rise and  fall of the group.

The internal tension among the band members was highlighted when an NME article entitled “Smiths to Split” was published by writer Danny Kelly following Johhny Marr’s sabbatical in 1987. Marr assumed the article was planted by Morrissey, which the latter claims was not. Later on, Marr blamed the pressure on him as a young musician to manage the band as the real cause of the group’s break up, saying,

“It’s what split the band up. To this day I haven’t met anyone who thinks a major rock group should be managed by the 23-year-old guitar player…It was the feeling of being tested, and my role in the band being untenable. Just like any break-up, bad sh*t goes on.”

Other theories of the band’s untimely demise cite Morrissey getting annoyed by Marr collaborating with other artists and Marr’s frustration with Morrissey’s musical direction.

A Clash With Slash

Notoriously megalomaniac, Guns N’ Roses surely had an appetite for destruction, even for their own band. Drugs, egos, and Axl Rose’s claim of an impostor soul inhabiting Slash’s body, Guns N’ Roses was a victim of the rock n’ roll lifestyle.

It’s famously known that front man Axl Rose and guitarist Slash weren’t the best of friends behind the scenes. After the iconic rock group disbanded, fans came up with many theories circling the rift between Rose and Slash. The BBC4 documentary called “The Most Dangerous Band In TheWorld: The Story Of Guns N’ Roses” tells of Rose’s belief that he saw Slash’s soul leave his body when he OD’d on heroin and was dead for eight minutes. Rose is convinced that a new impostor soul took over Slash’s body once resuscitated. However ridiculous that claim may be, A&R agent Tom Zutaut believes that was the beginning of the end of the band. The simplest logical reasons though, were your usual clash of personalities, fight for control, drug and alcohol abuse, and just plain ol’ bad behavior.

It’s All In The Name

Once again, pride and ego have destroyed another iconic rock band mid-success. Pink Floyd’s Roger Waters and David Gilmour’s feud was nasty enough to be taken to court. In 1985, when Waters left the band to pursue a solo career, he thought that would also equal as the end of the group. But David Gilmour and Nick Mason carried on with being Pink Floyd as band. Waters disagreed with them continuing with the band name without him so much so that he famously sued his ex-band mates to prevent them from recording, performing, and earning royalties as Pink Floyd. He demanded that he had to receive the royalties for use of any creative material produced during his tenure (which already ended once he left the band). It was an ugly chaos of court meetings and media statements. In the end, they arrived at an out-of-court agreement in 1987.  Later on, Waters regretted suing his band mates saying,

In a 2013 interview, Gilmour put the band to rest once and for al,l stating that

“…[The band] has run its course, we are done – and it would be fakery to go back and do it again.”

Raise your hand if you wanna fire Ozzy!

And that’s exactly what Black Sabbath drummer Bill Ward did one night in April of 1979. At the height of front man Ozzy Osbourne‘s heavy drug and alcohol abuse, the band decided that it was too much for everyone to handle. Times were becoming darker and darker for the Prince of Darkness and the band has had enough of walking blind with their out-of-control lead singer, so Ward volunteered to show Osbourne the door. Ward recalls, “it was one of the worst things I’ve ever done in my life”.

The band members weren’t talking anymore and the tensions between them affected their performances on stage. Osbourne says of their fallout,

“We were sick of each other [ ]…And none of us wanted to drag the black magic sh*t around forever.”

Black Sabbath did reunite decades after, without Bill Ward. To this day, Osbourne and Ward aren’t on speaking terms, with Osbourne even fat shaming Ward to the media despite saying he was hoping Ward “gets his stuff together” so they could record their final farewell album together. What a tragic, drawn out break-up this turned out to be.

The long and winding…dead end.

Perhaps something that is as legendary as The Beatles itself is their break up. The fact that the band’s strained road to implosion was actually taped and documented in the film ‘Let It Be’ calls for one of the most publicized fall outs in music history. Many fans blame Yoko Ono as the sole reason for breaking up The Beatles, saying she was the “fifth Beatle” and that her presence in the recording sessions was not at all welcomed. Of course, there are many reasons why the Beatles ended their streak of highly influential and fanaticized popularity, beginning with death of their manager Brian Epstein in 1967. Tensions just kept building higher since then, with the members wanting to pursue solo careers, and disagreeing on the musical and artistc direction they each wanted for the band. Rumors of a break up were floating around 1969 when John Lennon privately informed the band of his plans to depart. The imploding was drawn out from 1968 to 1970, until it was finalized after their documentary film was released in 1970 along with Paul McCartney’s announcement that he was leaving the band for good.