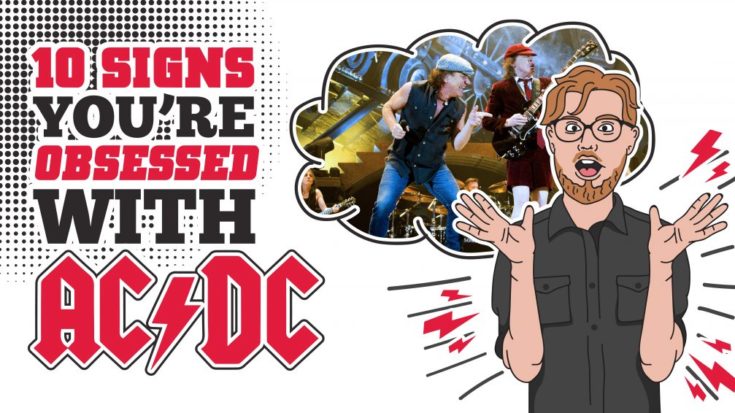 You may own every AC/DC  album in every possible form. You may know all the lyrics to all the AC/DC songs. You may have gone to an AC/DC concert more times than you’ve ever gone home for Christmas. You may know every quirk and move of all the band members. Hell, you can’t drive your car without busting out AC/DC on your radio! But how obsessed of a fan are you?

Click through to find out the 12 signs you’re obsessed with AC/DC.

10) You think about the band every time you see a sewing machine because you know that’s where the most iconic band name came from.

Yes, AC/DC literally stands for the electrical parlance abbreviation “Alternating Current/Direct Current”.  Brothers Malcolm and Angus Young’s early exposure to music was thanks to their older brother George  who invited the two of them to play with his own band, the “Marcus Hook Roll Band”,  just to give them an idea of how recording sessions work.  After their experience with their older brother’s band, they were hooked and wanted one of their one. When Malcolm and Angus were beginning to form a new band with a vision to produce a “hard-edged boogie” sound, their sister Margaret had an epiphany for the band name after she saw the initials “AC/DC” on her sewing machine. Her two brothers agreed that the name would represent the power-driven nature of their music.

9) You know that Australians pronounce AC/DC as AccaDacca and sometimes that’s how you say it too.

After coming up with the band name AC/DC,  Malcom and Angus Young were too naive back then to even realize that the term actually had a bisexual connotation attached to it that wasn’t particularly polite or appropriate. The first few years of establishing the band also meant they had to defend that the name is free of any associations with sexuality. Because Australians abbreviate slang and nicknames, “AC/DC” became known as ‘AccaDacca’ in the band’s native Australia. It’s the same way the Australian slang for McDonald’s is “Miccies” or the way biscuits are called “biccies”. In the US, UK, and other parts of the world though, AC/DC is pronounced as is, though a true obsessed fan would say it native.

8) You own more than one pair of the must-have “devil’s horns”. And they light up.

It all started with Angus Young’s Gibson SG electric guitar with the “little devil’s horns”. Then, it evolved into Angus using his two index fingers to form two horns above his head. It evolved further again into the most popular AC/DC fan merchandise that’s sold at their concerts. Some hate ’em but most love ’em because no matter how ridiculous, it looks ridiculously awesome lighted up en masse especially when everyone’s favorite “Highway to Hell” comes on. It’s become more of branding by the band who popularized the ‘devilish’ songs, “Highway to Hell,” “Hell’s Bells”, so the horns make perfect sense. Just like The Rolling Stones’ lips and the Kiss’, uh, face paint, the light up horns has become an iconic trademark for AC/DC.

7) If not all, at least one side of your room’s wall is covered in AC/DC posters.

Posters are a highly valued commodity in the world of the AC/DC fandom. It’s not just to decorate a wall with. It’s a big thing. Stereotypically, it’s only for teenagers to cover their room wall with whoever they are obsessing on during the dark times that is puberty, but if you’re a true AC/DC fan, putting up posters on your wall has no age limit. The poster craze was about the same time as the AC/DC mania was spreading like wildfire, so fans collect as many as they can for various reasons like keeping paraphernalia, commemorating shows that they’ve been to, or just simply staring at the beauty of Malcolm, Angus, Cliff, Phill, Bon, and also Brian.

6) You’ve kept your old school uniform so you can dress up like Angus. And you still wear it during concerts. It’s the most glam rock costume ever.

The Young brothers’ sister Margaret really had a big part in the band. Not only did she come up with the band’s name AC/DC, she was also the one who suggested that Angus wear his school uniform on stage all the time until it became his trademark. Margaret thought it was very cute that Angus would come home in his uniform and go to straight to playing his guitar in it. In one of the band’s first gigs, the band was talking about wearing costumes to the show and dress in character to gain attention. Angus donned his Ashfield Boy’s High school blazer to the gig only as a joke. Margaret saw beyond the joke and insisted that the uniform be worn to all upcoming shows the band would have. It’s a beautiful irony of an innocent school boy with a crazy wild stage persona. 42 years later, the joke has become an icon.

5) When you hear Angus Young’s solo coming, your air guitar makes an appearance.

Angus Young is one rock’s most energetic performers and best (albeit underrated) guitarists of all time. His wild and manic stage persona is highlighted by his enduring, face-melting, head-bobbing, floor-sweeping guitar solos. Everybody knows when Angus plays his insane Chuck Berry licks on his signature Gibson SG electric guitar, you gotta play along with your air guitar no matter where you are. It’s only natural to jam along a rhythm you can’t resist! But nobody could ever keep up with his enduring energy when playing and anyone who ever tries ends up shirtless, panting, and drowning in sweat much like Angus is but more exhausted than he is.

4) You are never confused between Bon Scott’s and Brian Johnson’s voices.

The million dollar question that AC/DC fans are anxious to answer is to choose between the two front men that graced the band: Bon Scott or Brian Johnson? Scott was of course, the original lead singer who was at the front of it all when the band rose to stardom in the 1970s. Though he was part of the band for only 5 years before meeting his tragic death in 1980, his unique voice helped cement the brand and identity of AC/DC, having recorded six studio albums during his run as the band’s lead singer. Johnson took over Scott’s place in the band during a difficult time following his sudden passing. Johnson, though taking off from Scott’s shadow, was able to add his own playful personality in the music and was able to carry the band through great success for more than 3 decades. Johnson’s big and raspy take to classics like “Highway to Hell” and “Back in Black” certainly complimented the electrifying and power-driven performances of the band.

3)  “Highway to Hell” has been your jam to a speeding ticket at least once.

There’s no argument that “Highway to Hell” is one of AC/DC’s biggest hits to date. The inspiration for the song actually comes from a real highway in Australia called Canning Highway which ends near a pub called The Raffles, a drinking place where rock n’ roll was alive and booming in the early 70s. The said highway had a steep decline where speed limits cease to exist and speeding drivers most likely meet their deaths. Funny enough, there was actually a study which states that drivers who has had four or more speeding tickets are 12 per cent more likely to listen to Classic Rock radio while driving. That would make sense if you hear AC/DC on the radio, especially when “Highway to Hell” comes on and you suddenly have this urge to put the pedal to the metal.

2) You’ve been accused of being a rebel or a devil worshiper for your AC/DC passion, and you don’t give a crap about it.

AC/DC isn’t exactly the band your conservative parents would approve of. In fact, it’s the band your parents probably warned you about. The evil rebel vibe of the band isn’t a secret whatsoever. It is what actually makes the band popular. With explicit “demonic” titles such as “Hells Bells” “Dirty Deeds Done Dirt Cheap” “Shoot to Thrill” and well of course “Highway to Hell”, and the popularization of “evil” symbols and merchandise such as the horns, lots of fans get accused of being devil children or anti-religion. Most fans just dismiss these accusations and just say it is simply Rock N’ Roll.

1) You love milk as much as you love alcohol the same way you love Angus as much as Malcolm.

Rock stars are notorious for their heavy drinking and drug abuse and AC/DC is no exception to that with Bon Scott dying from alcohol poisoning and Malcolm Young also known to be a heavy drinker. Booze will always be present in their shows and concerts, that’s just how rock n’ roll is. While Malcolm is hard drinking up the night walking around with a big bottle of Jack backstage, Angus is going against the flow and favors milk, chocolates, and the good ol’ cuppa instead. He even remembers when chocolate milk was first invented and said, “when it was first invented, the only one that had a problem with it was my dentist.”  Although there’s nothing wrong with alcohol in moderation, it’s good to know Angus has a healthier addiction, which assures us he just might be around for a long time.