7 Nastiest Feuds In The History Of Rock 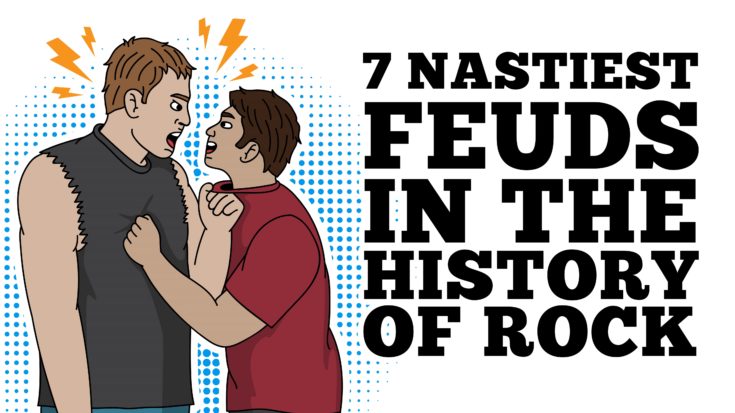 Let’s face it: good or bad publicity is still publicity. And even though some of these ‘combatants’ have never patched things up, they really got people talking. We can’t rank the beef of the century because at one point or another, these feuds became so nasty we almost wanted to stop hearing about it altogether.

So here you have it, ladies and gentlemen, some of the most intense and most talked-about fights in rock ‘n roll.

This American folk rock duo recorded their fifth and last album more than 45 years ago and even though their relationship was no longer all rainbows and butterflies at the time, it was highly successful. “Bridge Over Troubled Water” had a total of 11 tracks simply because Paul Simon and Art Garfunkel couldn’t agree on the 12th song and in fact, refused to record what each other’s choices were. Over the years, they’ve had a couple of word wars and diss exchanges like when Art talked about Paul and he said, “I created an idiot.” But how and when did it all begin? According to a documentary, it started with director Mike Nichols when he initially cast Paul and Art for his film adaptation and all of a sudden, he cut off Paul. They were supposed to release a reunion album in the ‘80s but Paul removed Art’s vocals and instead, made it a solo.

Success comes with a price and for Vivian Campbell and Ronnie James Dio, it was major misunderstanding which got in the way of their making incredible records together. Before his death in 2010, Dio said that Campbell was a “f—ing a–hole…. he’s a piece of s—.” And although some people said Dio was a nice, cool guy off-stage; Campbell adamantly disagreed and even referred to Dio as “one of the vilest people in the industry.” But even if they haven’t settled their differences, Campbell has absolutely no regrets especially because they had communication problems most probably due to their age gap. When Campbell was interviewed by Radio Metal, he also said: “Even when I was in the band with Ronnie [James Dio] back in the days, we never had a very strong relationship beyond music. That was what brought us together: we were on stage together, recording and writing songs… It was a very strange relationship between he and I. It was a lot of miscommunication, of misunderstanding and I think a lot of it was generational.”

When you’re in a band, tensions will always arise no matter how strong you think your bond is. I mean, it’s a lot like getting into fights with your siblings over the most trivial things. And The Rolling Stones weren’t immune to it. Sure, they’ve had a five-decade bromance and plenty of parties in between but there’s were also news that the two couldn’t stand each other. In fact, there were several beefs that almost threatened to split the band. But in the ‘80s, things have gotten so bad that Keith even referred to it as the “World War III.” It was during the time Mick was working on his solo album and was nowhere to be found for the Stones’ recording sessions. Fortunately, they were able to work they way around their differences and Keith shared in one interview, “Sometimes he can get up my end, and I have no doubt that I can certainly piss him off sometimes. At the same time, there’s a chemistry between us that we both recognize and that we know works.”

Roger Daltrey has always had an unpredictably massive temper. When it flares, be sure to steer clear because fists will likely fly around. Case in point, when he punched Keith Moon in the face, causing him to be dismissed from the group. However, he was rehired more than a week later. But it wasn’t the only time there was altercation between band members. It was during their filming of “Love Reign O’er Me” for ‘Quadrophenia’. Pete was so drunk that he attacked Roger with a guitar and even tried to punch him. Roger was able to duck and hit Pete with an uppercut so hard he was literally knocked out cold. Pete later claimed that he lost two days’ worth of memory because of it. According to Pete though, there was no bad blood after: “It was a hell of a punch. But it was the only one – there was too much respect there for it to happen again.”

It’s one of the most historical feuds in classic rock and some people are still talking about it until now. After The Fab Four’s infamous split back in 1970, John and Paul started dissing each other. And while that may have already caused plenty of ruckus, being the award-winning songwriters that they are, they saved the nastier words for their songs – remember Lennon’s “How Do You Sleep” track in 1971 where George Harrison even played guitar? They may have reconciled a few years later and also managed to record together but their relationship was never the same. Nevertheless, they managed to patch things up before Lennon was tragically shot. McCartney said in The Jonathan Ross Show, “I’m so glad because it would have been the worst thing in the world to have this great relationship that then soured and he gets killed, so there was some solace in the fact that we got back together. We were good friends.” Well at least there was no more bitterness towards the end.

Inasmuch as Van Halen is known for making great records, they’re also famous for being a ‘dysfunctional’ band. First off, there’s the bitter rift between Eddie Van Halen and Sammy Hagar after Eddie slammed former bassist Michael Anthony for his lack of skills. And there have been several lineup over the years with some members leaving because of their beef with Eddie. Singer David Lee Roth left in the middle of a growing tension within the band. One of their widely publicized feuds began when David announced his departure so he can pursue a solo career and also be an actor. He even asked for Eddie to score the movie. For the next few decades, David would try to step up as the vocalist and leave again. Last year, Eddie had some harsh words for David saying “He does not want to be my friend.” Last May, however, David shared that he has a sense that they will record and tour. As fans, the only thing we can do is hope that all goes well.

Axl Rose isn’t the most loved rock vocalist and he’s kinda far from being a role model. Back in the day, he was known for his explosive temper and there’s even a list of celebrities he’s had arguments with. One of them is Nirvana’s frontman Kurt Cobain. It began with Kurt’s trash talking when he said, “We’re not your typical Guns N’ Roses type of band that has absolutely nothing to say.” Even so, the following year, Axl asked Kurt if he and his band could support them on their tour and open up for GnR but Kurt declined the offer. During the MTV VMAs in 1992, Kurt’s wife Courtney Love asked Axl if he was willing to be Frances Bean’s godfather. Instead of politely declining, Axl spoke directly to Kurt saying “You shut your bitch up, or I’m taking you down to the pavement!” To this, Kurt followed his suggestion sarcastically. Axl then proceeded to challenge Kurt to a fight. Keep in mind that Kurt was holding his daughter the entire time. But we guess all is good now since Axl even paid a tribute to Nirvana during one of their shows this year.