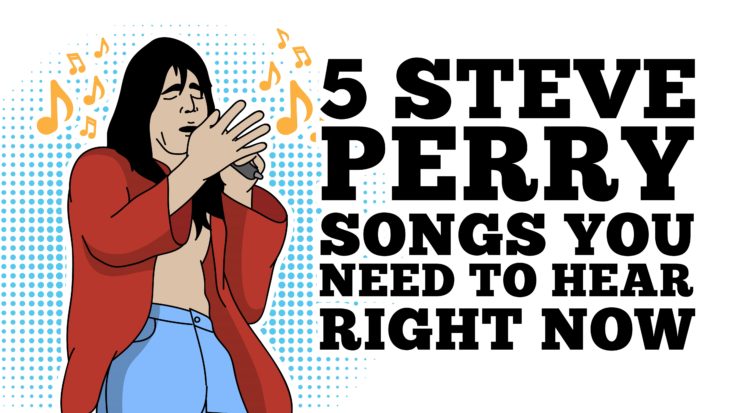 We can’t stop gushing about Steve Perry because he’s simply one of the greatest vocalists ever. If there’s a classic rock artist we’d love to tour again, it would be Steve (and Grace Slick, probably). Those golden pipes were something else. Though he has plenty of unforgettable hits during his time with Journey, this list includes some of his most beautiful works after he left the band (yes, there are more songs than ‘Foolish Heart’):

Most people think it’s tough trying to build a successful solo career especially for those closely associated with their bands. Steve Perry isn’t one of those. His first post-Journey album hit us like a punch in the face. ‘Street Talk’ is easily one of the best albums in the ‘80s and “I Believe” makes you feel nostalgic. It brings you back to those days when you were plugging in your earphones and enjoying the music during long bus rides. Anyway, we were so used to hearing him hit those high notes flawlessly but here, his voice is so incredibly deep. It’s so raw and different but still had that Steve Perry flavor that we all loved. This solo material is proof that he’s still epic on his own. We like listening to him sing in the lower register simply because it feels like it’s where his soul is – the music is just brimming with emotion.

This upbeat track will remind you of Steve Perry’s versatility. It’s the kind of song you listen to on Saturday mornings when you just can’t help but put the volume on max. Nobody sings it like Steve. With that awesome tune and killer harmony, all you need is some phenomenal voice to top it off. Oh and let’s not forget how fabulous his hair looks in this video. He’s flawless, through and through. And he definitely looks like he’s having fun. Ah, it does remind you of awesome summer days, doesn’t it? It’s one of his most underrated tracks but once you hear it, it might instantly become your favorite. If you haven’t stumbled upon this gem before, then you’re welcome. Warning though, you need to put on your seat belt or else, you might just be blown away. Nope, we’re not kidding. BRB as we dance around the room to this song.

He’s always had such a rare and distinctive voice which are equal parts sexy and sultry. It’s raw and pure and this song is a true masterpiece. Of course, let’s not measure it up against “Don’t Stop Believin’” or “Faithfully” because this is obviously on a different level. Nevertheless, it’s an absolute work of art. Still, it’s quite possibly one of his most powerful and chilling tracks. It’s literally jaw-dropping. You can’t listen to it and not be emotional. It’s the gift Steve Perry has – he can connect to people on a visceral level with his music. It will really get to you – even the guitar solo. It’s a haunting tune and Steve just sings with so much passion. It makes you wanna sing along at the top of your lungs. It has that rough edge and of course, the incredibly-controlled scream. It’s magical and will hit you right in the feels.

That sudden start gets to us every single time. It will definitely send shivers down your spine like a beautiful surprise. You can listen to it every day and still not get tired of it – once is not enough. And the harmonies are stellar, not to mention the powerful tune. It’s like Steve Perry doesn’t settle for anything less than perfect. Ranking these singers, there’s GREAT then there’s Steve. You can’t categorize him because his musicality encompasses everything. In terms of range, he is unmatched. There’s so much soul in every note, you can totally ‘feel’ it. He has his own style and lives true to his moniker, ‘The Voice.’ It’s probably one of his finest vocal performances although to be fair, it’s hard to decide because he’s always slaying it whether it’s a Journey classic or post-Journey hit. If anyone has a time machine, can we borrow it? We’ve never wanted to go back to this era so badly.

Steve Perry shared this during his 2011 interview with MelodicRock.com, “Everything you’re hearing on the ‘Street Talk’ record is absolutely performed in the studio and captured on a piece of tape…It was a special time in my life, I think.” The word ‘magical’ would be an understatement here. This was Steve’s biggest hit in his entire solo career and it was dedicated to his then-girlfriend Sherrie Swafford. The music video with Sherrie’s special appearance received heavy airplay on MTV. Somehow, this song captures the entire ‘80s vibe. Steve’s powerful voice will render you speechless. He’s always had that solid singing with just the right amount of rasp. Remember, this was recorded at a time when music was so real – no auto tunes or other high-tech equipment. It’s just him and his talent. A singer like him doesn’t come around too often – aren’t we lucky to have witness his greatness? His voice is a gift for all mankind.