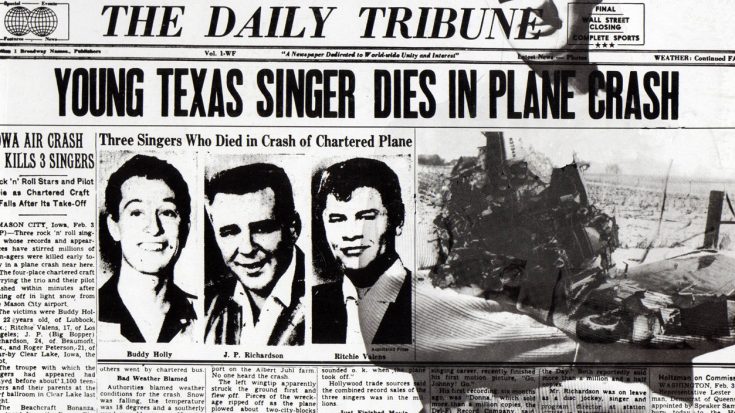 The Day The Music Died

The collective shock caused when news of the crash broke reverberated around the world, with people everywhere mourning a loss of innocence and what singer-songwriter Don McLean would later call, “The Day The Music Died”. It wasn’t the fact that it was a plane crash that claimed the lives of these men that left us so shaken – it was the fact that at 17, 22, and 28, they still had lifetime’s worth of living left to do.

Ritchie Valens was a pioneer of Chicano rock, becoming the first Hispanic rockstar by age 17 with smash hits like “Donna,” “La Bamba,” and “Come On Let’s Go”; Buddy Holly was racking up Billboard hits left and right, looking forward to a career free of The Crickets and to the birth of his first child with wife María Elena. At 28, J.P. Richardson was successfully juggling life as a husband, soon to be father of two, and his status as one of rock’s fastest rising stars with the chart topping “Chantilly Lace”.

Note: Holly’s young wife, Maria Elena, suffered a miscarriage upon hearing of her husband’s death announced on the news. After the crash, a policy was later adopted not to disclose victims’ names until after their families are informed.

It’s been 60 years since the day the music died and still, there’s a part of rock fans everywhere that stops and silently mourns every time strains of “Donna” are heard, or even when we see a pair of eyeglasses similar to those worn by a certain brown eyed boy from Lubbock. For Buddy, Ritchie, and The Big Bopper, life was all too short; the victims of a cruel twist of fate.

For us, their legacy lives on nearly 6 decades after the day the music died and maybe, just maybe, that’s enough to keep the flame burning for just a few more generations.