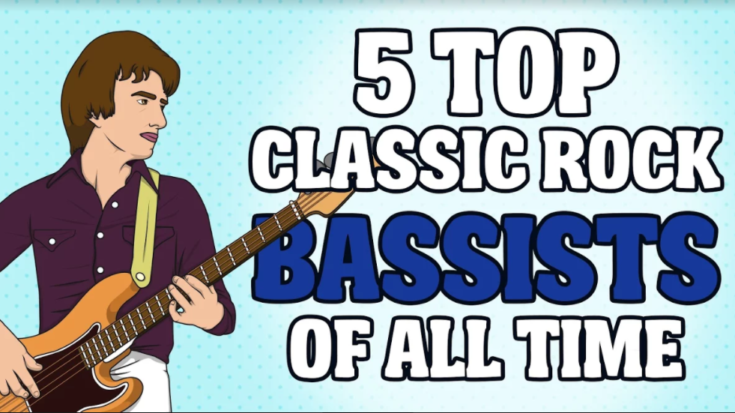 Turn up the bass!

Bass players complete the sound and depth of a band’s music. Without the bass, the rhythm section would be completely flat. Particularly in rock music wherein higher energy is expected from the sound of a band, the bass is very important in driving out that rhythmic energy that makes the band’s music whole. The bass is the pulse of the band. And yet, bassists are the most underrated component of a band and they almost never get the credit they so deserve. They may not be flashy like the lead guitarists with face-melting solos, but without them, the band falls apart. It’s a thankless responsibility and it is high time that the spotlight shine on the best ones.

Here are the top 5 classic rock bassists of all time:

Speaking of the underrated, here’s one of the greatest session bassists of all time and yet nobody really knows who she is. Her skill level and the number of hit song credits she’s played is beyond those of the male classic rock bassists of her time. Meet Carole Kaye, The First Lady of Rock Bass Guitar.

She’s probably the greatest bass player you’ve never heard of – you’ve definitely heard her bass playing but sadly, not her name. Though the vastness of the number of hits she’s worked on is almost incomprehensible, let’s try and list some of the greatest hits ever that she played bass for shall we? Well, there’s Brian Wilson’s “Pet Sounds”, The Beach Boys’ “Good Vibrations”, Simon & Garfunkel’s “Scarborough Fair / Canticle”, Joe Crocker’s “Feelin Alright”, the list goes on and on. Oh and the Batman and Mission Impossible theme songs? That’s Carole Kaye’s bass making music history. She’s one of those behind-the-scenes studio session players that pretty much built the foundation of the early rock sound. She’s definitely all about that bass.

It is undeniable that part of the success of Queen (aside from each member’s impeccable musical talents), is that their songs are very catchy – thanks to the memorable bass riffs of their legendary bass player, John Deacon. Not only is John Deacon clearly one of the best bassists of classic rock all in all, his songwriting credits are also very extensive. He said of his songwriting role in the band,

“If I’d just been a bass player all my life with the band, I wouldn’t be as satisfied as I am because I only consider that as part of what I do. The songwriting and being involved in the decision making processes means I’ve been able to have a part in the bands destiny.”

Queen iconic songs such as “Another One Bites The Dust”, “Under Pressure”, and “Killer Queen” wouldn’t have been reached legendary status if not for the amazing melodic bass riffs by Deacon.  Sadly, after the death of Queen’s front man Freddie Mercury, Deacon didn’t see any point in continuing on with the band and part ways, only playing a handful of gigs in the following years.

His name is as synonymous to The Beatles as John Lennon’s. Usually the bassists are the lesser-known members of a rock band, happily filling out the rhythm and pulse of a band’s sound in the background of an energetic lead singer or lead guitarist. Paul McCartney is the exception to that stereotype. The Beatles’ left-handed bassist is also the co-lead singer of the one of the most iconic bands in history. His creative bass line compositions in hit iconic songs such as “Come Together”, “Taxman”, “All My Loving”, and “Lucy In The Sky With Diamonds” became some of the most recognizable bass riffs in classic rock. His versatile ability to play melodic bass lines across the fingerboard while singing in a wide vocal range at the same time is just pure musical genius. His unique bass lines are even complimentary to Lennon’s singing as a counter melody at times. McCartney’s impact on rock n’ roll as a bass player perpetuates through his influence on many artists of today.

Led Zeppelin’s secret weapon comes in the form of their insanely talented but obscurely underrated bassist, John Paul Jones. But even before Jones made music history with the rhythm section of Zeppelin, he was already considered one of the best bassists in his own right in England, playing as a session bass player for many notable artists. With the rock star flashiness of his other band members being worshipped by adoring fans, Jones made himself known through his memorable bass lines in iconic songs such as “Dazed and Confused”, “Ramble On”, “The Lemon Song” just to name a few. Jones’ dynamic bass playing was truly groundbreaking for the band. He and madman drummer John Bonham were just flawless as the rhythm section, and were probably the best partners in a rhythm section of any band. Post-Zeppelin, Jones still thrived in his bass-playing career playing with a number of great bands and artists, and forming a band of his own called Them Crooked Vultures with The Foo Fighter’s and Nirvana’s former drummer Dave Grohl on drums and Queens of the Stone Age’s Josh Homme on lead vocals.

1. John Entwistle – The Who

John Entwistle of The Who was nicknamed Thunderfingers for a reason – his bass playing skills are so insanely hard-hitting, it feels like thunder. He also had another nickname, “The Ox”, that for his habit of standing completely still on stage even as he unleashed his powerful bass lines during high-energy concert shows.

The legendary bassist developed the unique playing style of playing the bass as if it were a lead guitar. He also made use of the treble frequencies and several other pioneering techniques in bass playing such as the “typewriter” tapping and strumming that are still being used by prominent bass player to this day.  Entwistle’s skills were captured on his signature bass solo breaks in The Who hits such as “My Generation”, “Sparks,” “The Real Me,” and “Dreaming from the Waist.” With a successful career that lasted over 40 years and with original pioneering playing styles and techniques under his belt, it’s cannot be denied that Entwistle was one of the best bassists of all time.