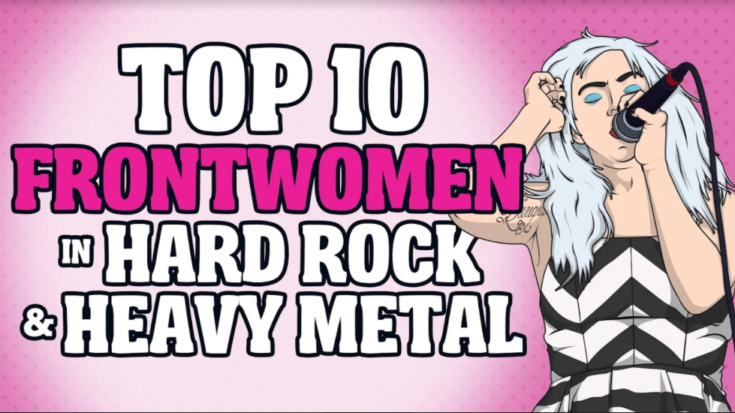 It’s no secret, especially in our world today, the women have always been powerhouses of hard rock and heavy metal. These front women lead their rough-rocking bands like a fierce lionesses and stand out in an industry and a genre more stereotypically fronted by men. Women are rising up and taking their rightful place at the top of the world of heavy metal rock. You’ll be surprised that some of these talented female singers can successfully bust out metal growling and screaming! It’s high time these women get the recognition and respect they so deserve in the hard rock and metal genre given their immense vocal talents and undeniable beauty. With their incredible voices and gorgeous personas, they can be truly considered as metal and hard rock royalty.

Lacey Sturm had a twelve year run as the front woman of the hard rock band Flyleaf which she also co-founded in 2000. Before her amicable departure from the band in 2012 to focus on raising her family and pursuing other projects, as the lead singer of Flyleaf, the band had a platinum album, a number one spot on the Billboard alternative chart, top 20 spots on the Billboard 200, and a couple of Grammy nominations. Four years after leaving Flyleaf, she released her debut album as a solo artist , Life Screams, in 2016 which debuted at No. 74 on the Billboard 200 and number one on the Billboard Hard Rock Albums chart. She has also collaborated with other big names in the hard rock genre such as Apocalyptica and with Orianthi.

9. Sharon den Adel of Within Temptation

The lead singer of the Dutch symphonic metal band Within Temptation has been doing music from the young age of 14. Though she never had formal vocal training, she amazingly has a mezzo-soprano range that is evident when you listen to her epic vocals for the records she does with Within Temptation. She also founded the band in 1996 with Robert Westerholt with whom she now has three children with. A super woman with incredible talents, her vocals are versatile as they are powerful especially highlighted when she sings with a full orchestra. She can also sing bilingually – both in her native Dutch and in English. In addition to that, she also holds a bachelor’s degree in Fashion Design and uses her expertise by designing her and her bandmates’ stage costumes.

8.Brody Dalle of The Distillers, Spinnerette

The rebel punk rock princess Brody Dalle was hailed as the next Courtney Love when her band The Distillers came into public consciousness with their debut in 2000. Dalle co-founded the hard rock band The Distillers in the late ‘90s with her ex-husband Tim Armstrong whom she married when was just 18 years old. The Distillers released three albums before disbanding in 2006. In 2009, Dalle started another band Spinnerette and released an album in 2009. In 2014, she released her first solo album Diploid Love.

The Australian native’s affinity to Courtney Love and Hole started at the age of 12 when she discovered Nirvana. Love obviously became a strong influence on her as well as other incredible female-fronted rock groups such as Babes in Toyland and Bikini Kill. Her fierceness, sharp edge, and aggressive performances made her one of the most popular and recognizable faces of punk rock in the early 2000s.

Simone Simons is the gorgeous redhead Dutch lead singer of the metal band Epica. Deviating from the usual route of singers to pop singing lessons, she left pop in favor of classical singing after being inspired by the metal band Nightwish. This switch has helped her develop her gothic symphonic metal style that perfectly complimented her operatic vocal range. The fierce fiery singer has lead Epica to become one of the most popular symphonic metal bands there in the industry. She founded the banded together with Mark Jansen (formerly from the band After Forever). Her classical influences and passion for heavy metal are evident in the fusion of classical-rock in the band’s musical stylings. This fusion has classified them as neither heavy metal nor classical but somewhere in between.

One of the most hardworking artists and most recognizable names in metal, Lzzy Hale is the frontwoman of the band Halestorm and also serves as its namesake. Lzzy and her brother Arejay founded the band when Lzzy was just 14 years old. Her no-frills, raw and raspy vocal style is reminiscent of the female rock singers of the ‘80s. Lzzy also serves as a metal ambassador and innovates the genre by doing crossover collaborations with up and coming contemporary violinist Lindsey Stirling and country singer Eric Church. Halestorm is known for grinding it out on tour, performing an average of 250 shows a year. The widely popular TV show Glee has even covered a Halestorm song. Halestorm also has the honor of being the last band to share the stage with legendary vocalist Ronnie James Dio as the opening band for his final performance with Heaven and Hell in 2009.

There’s no denying that Amy Lee has got to be the one of the most popular female hard rock singers in contemporary music. Evanescence, the band she co-founded and is the lead vocalist of, is very well-decorated with two Grammy awards, two albums to reach the top spot on the Billboard charts, two certified platinum records, and over 25 million albums sold worldwide. She accompanies her chilling smooth vocals with her classical piano training, as well as being the primary songwriter of the band. Her eclectic musical influences range from Mozart to Björk. Her other projects include a stint with Walt Disney Records’ Nightmare Revisited, and Muppets: The Green Album, and doing vocal collaborations with other heavy metal legends such as Korn and Seether. Add to that the bonus of her stunning beauty, she was named the #1 Hottest Chick in Hard Rock by Revolver Magazine in 2011.

Angela Gossow is known to be one of the elite few successful female metal singers whose primary singing style is growling. And she does it really well. The German singer was the former front woman of the Swedish melodic death metal band Arch Enemy from 1991 to 2014. Before she perfected the growling style for Arch Enemy, she was also the lead vocalist for other metal bands such as Mistress and Asmodina. Nowadays, she’s retired from her growling days and spends her time in a new career as the band manager instead of the lead singer. She’s pioneered the unique growling vocal style for female singers today, a style that proves to be highly challenging for both male and female singers alike. Gossow has proved to have a massive contribution to the entire heavy metal genre.

3. Doro Pesch of Warlock and Doro

German singer-songwriter Doro Pesch, has literally been hard-rocking for more than 30 years and she ain’t showing signs of stopping just yet. At the golden age of 52, Doro still does her best trademark scream and vibrato quite flawlessly. The former front woman of the heavy metal band Warlock has been a forerunner of heavy metal since 1986. Her humble roots begin in garage band in her native German small-town of Düsseldorf. Although Warlock has notoriously gone through countless line-up changes, Doro remained with the band until she was the only original member of the band left and then she was just forced to rename the band to her namesake, “Doro”. The renaming was also done to avoid legal battles between her former manager and her own record label. As a veteran heavy metal singer, she has gone to inspire many other female metal artists.

Italian singer Cristina Scabbia has one of the most malleable vocal ranges in heavy metal. Her abilities lets her sing soaring high notes and hit the ground shaking low notes as well. Together with co-lead vocalist Andrea Ferro, they perfectly compliment each other in the right balance of beauty and beastly. As the lead singer of the Italian gothic metal band Lacuna Coil, Scabbia has been singing for the band since 1991. Aside from helming a widely successful rock band, Scabbia is also a writer, not just of tauntingly beautiful song lyrics, but also of sought-out life advice. She serves as an advice columnist alongside Vinnie Paul in the popular rock magazine Revolver. The timeless beauty is already in her 40s but she doesn’t even look a day older than she was when her band started in her 20s. Heavy metal must be the fountain of youth!

Tarja Turunen and Nightwish has been cited as a musical influence of most female front women on this list and there is a very good reason why. The Finnish metal singer-songwriter is a classically trained mezzo – soprano with a vocal range of three octaves. She studied at the prestigious music school Sibelius Academy in Finland and utilized all her music training into forming the widely influential Finnish symphonic metal band Nightwish in 1996. She basically invented “opera metal” which also inspired many metal performers to follow suit. The band’s symphonic metal style features hard hitting and high-speed guitar riffs that accompany Turunen’s emotionally driven, dramatically powerful “operatic” coloratura vocals. The band achieved critical and commercial success with their musical innovations. Sadly, Turunen was dismissed from Nightwish in 2005 but still managed to carve out a successful solo career after the break-up. Surely, with a voice like hers, she will hardly go unnoticed for a long time.