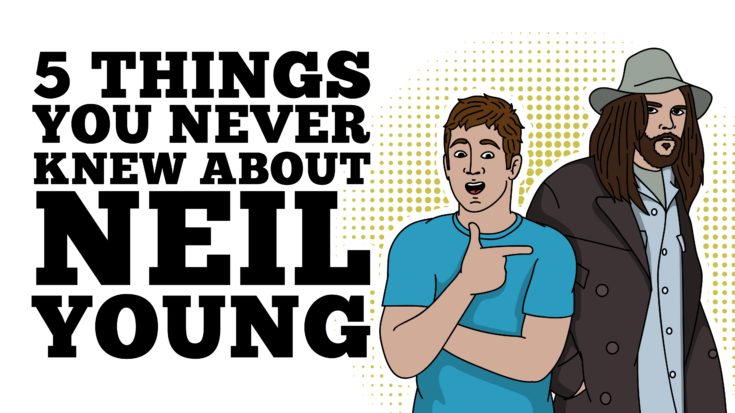 He’s one of the truest rockers who ever walked the earth – a guitar-slinging rock god who has a long and brilliant career with epic musical legacy to boot. And we are more than grateful to him for sharing his gift with us. So for all you Neil Young fans, here are some facts you probably haven’t even heard of:

5. He Only Had Only One Number 1 Single

If someone asked you what your favorite Neil Young song is, what would you say? Well you can choose from a wide array of hits like ‘Rockin’ In The Free World’, ‘Ohio’ or ‘Old Man.’ But what you might not know is despite being well-loved and critically acclaimed, he’s only had ONE number 1 single in the US Billboard Chart and Canada’s RPM National Singles Chart and that is ‘Heart of Gold.’ It’s from his fourth album in 1972, ‘Harvest’, with James Taylor and Linda Ronstadt providing the backup vocals. This soft acoustic piece was created while Neil suffered from back injury and couldn’t play his electric guitar but he was still in good spirits. He liked this song so much that he ended up recycling its main riff for ‘Slowpoke’ – a track of Crosby, Stills, Nash for their final studio album ‘Looking Forward.’ In the liner notes of ‘Decade’, his compilation album released in 1977, he wrote: “This song put me in the middle of the road. Traveling there soon became a bore so I headed for the ditch. A rougher ride but I saw more interesting people there.”

4. He And Rick James Were Buddies

Before Neil Young formed the folk rock group Buffalo Springfield in 1966, he was part of The Mynah Birds with R&B legend and ‘King of Punk Funk’ Rick James. Their music was a fusion of rock, soul and funk and though they didn’t release an album, they have some recordings. Also, this is where Neil met Bruce Palmer. Their career with The Mynah Birds may be short-lived (from 1964-1967), but Neil and Rick developed a deep friendship and even went so far as share an apartment in Toronto. During an interview with Howard Stern in 2014, he talked about how much fun it was whenever he and Rick were hanging out: “We did some wild things. It’s all very hazy to me now. I’m glad I made it through that stage. It got a little dicey. There were some drugs going on. I remember singing one song for about a day and a half.”

In the ‘90s, people were so used to hearing Neil play raw rock ‘n roll music that some of them didn’t really approve his soft acoustic pieces. But the reason wasn’t because Neil wanted a different brand of music or even just for an image overhaul. The fact is, he developed a condition called tinnitus which is a buzzing or ringing in the ears. It was the after-effect of years of listening to loud rock music and it has eventually taken its toll. That’s why he had to turn to acoustic sounds. When he was interviewed by MOJO Magazine in 1995, he said: “I made ‘Harvest Moon’ [in 1992] because I didn’t want to hear any loud sounds. I still have a little bit of tinnitus, but fortunately now I’m not as sensitive to loud sounds as I was for a year after the mixing of ‘Weld’ [in 1991]. My hearing’s not perfect but it’s okay.”

During his free time, he’s not lounging on the terrace and playing with his guitar. Instead, this legendary rock star prefers paddleboarding. He was once quoted saying, “I’m going out paddleboarding with my girlfriend tomorrow morning. It’s a beautiful thing…I can’t worry about the paparazzi. You can’t see them anyway. They are taking pictures from behind trees. You can’t think about that.” Now that we know why he loves this hobby, it’s no surprise actually. There’s no more effective buzzkill that’s sure to ruin your day than having camera-toting strangers waiting to get a good (or bad) shot of you so they can sell it to the media. For all his health scares (case in point, his life-threatening brain aneurysm way back in 2005), it’s perfectly understandable that he’d prefer the tranquility he can experience while paddleboarding. He did have a tropical haven in Hawaii which was perfect for that and he even said, “Like the time I was in Hawaii I’d get up at five o’clock in the morning and start writing, and I’d write until I was tired of writing and then I’d go paddleboarding.” But he must have gotten bored because he listed it last year for $20M.

Neil Young is a model train enthusiast, so much so that he invested in Lionel Trains LLC (very popular in manufacturing model railroad accessories and toy trains) when he found out that the company’s about to go bankrupt. That made him part-owner but in 2008, when it emerged from bankruptcy, Neil’s shares from the investment group were wiped out. Nevertheless, he’s still a member of the board of directors. As if his 3,000 square-feet of trains and tracks complete with outbuildings, mountains and ravines in his Broken Arrow ranch isn’t enough, he also has two old train cars. But he doesn’t just collect these items, he also loves inventing stuff and in fact, is co-inventor of seven US patents for model trains including the ‘TrainMaster Command Control’ and the ‘Big Red Button’ which was inspired by his son, Ben. Neil explained, “It was developed with an eye for doing a lot of things with my son. Using a controller that was accessible to a physically challenged individual who had different ways of accessing switches … And it just turns out that through the development of it, it’s made it possible for a lot of other things to happen for everybody who plays with trains. That really couldn’t happen before.”

1. He Refused To Perform At Woodstock ’94

Finding the event way too commercial and corporate for his taste, Neil Young turned down the offer of a million dollars after being invited to headline for Woodstock in 1994. This was held in commemoration for the original Woodstock Festival’s 25th Anniversary at the Winston Farm in Saugerties, New York. Some of the performers included Joe Cocker, Aerosmith, Metallica, Bob Dylan and more. Even Crosby, Stills & Nash were there and shared the stage with John Sebastian. Rumors had it that Neil, upon learning they were performing, told them they were sell-outs. Peter Gabriel was the one who eventually headlined the North Stage. This year, though, Neil will be part of the Desert Trip Festival which will be on October. But when asked about the event during an interview with BBC, Neil only said: “I know nothing about it really. I’ve been asked to do a gig, and I’m going to do it. It’s great they asked me to play with all those artists. That’s wonderful, it’s a great honour to play with all of them. But aside from that, it’s just another gig.”