5 Songs That Need To Retire 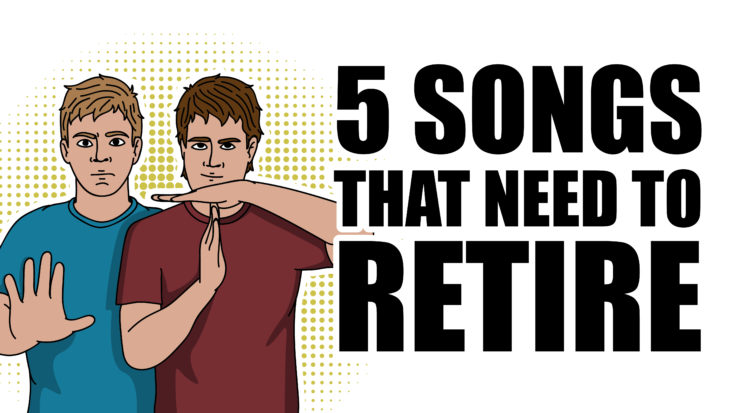 We Just Don’t Want To Hear Them Anymore

Do you know the fastest way to hate a song? It’s hearing it on the radio as if it’s the only thing they will ever play. You may have liked them at first but over time, it gets really annoying that he first few notes alone already feels like nails on a chalkboard. It’s like eating your favorite dish every single meal straight for a week – you’ll get to the point where you just can’t take another bite anymore.

There are hundreds of great lesser-known songs from Pink Floyd to Queen and with such extensive catalog, we don’t understand why DJs pick around two or three to put on repeat. The sad part is, these tracks are stellar – mind-blowing, jaw-dropping works of musical geniuses. But playing them too many times renders them practically intolerable.

We rounded up five of the most overplayed classic rock songs that deserve a very long hiatus from the radio or anywhere else for that matter.

Who would have thought the day will come when we can’t bear to listen to this epic masterpiece anymore? It’s one of the greatest classic rock songs of all time and we understand how radio stations feel pressured to play it every now and then but let’s be honest, sometimes it’s just too much.

Like, is there some sort of mandate that DJs have to play it on an hourly basis? The thing is, we can easily name 10 tracks to put on rotation – 10 songs which are just as great although not as often played.

We totally agree that this is the track that best represents Led Zeppelin at the top of their game. Still, that doesn’t take away the fact that if we won’t mind not hearing this in the next couple of years.

Journey deserves their legendary status and Steve Perry is undoubtedly one of the finest singers in the history of rock. The man could sing the yellow pages and it will still be a hit.

To be fair to these guys, “Don’t Stop Believin’” is catchy. It’s the kind of song that’ll get stuck in your head for days on end. You can literally hear this everywhere – films, commercials, sports events. It’s a staple even during karaoke sessions so really, classic rock radio stations should just go ahead and pick another track from the band’s catalog – we’re pretty sure they can find more than five which are worthy replacements.

Fun Fact: “Don’t Stop Believin’” is one of the most downloaded songs to date.

You see, if everyone can stop shoving this down our throats, we’d be extremely thankful. We love Steve Perry and the rest of the group but if we just stop being lazy and dig in more, we can definitely find more than a handful of musical gems in their records.

Not everyone likes The Rolling Stones but even if you’re not a huge fan of the band, surely you are well aware that they have more great songs that deserve some appreciation aside from “Satisfaction.” Sometimes, you can’t help but think that some people treat it as if it’s the only track they ever released!

They have plenty of good records and we mean why-did-I-hear-this-rare-gem-just-now kind of good. There’s no thrill or surprise here anymore. Overtime, it only gets tedious.

“It was the song that really made the Rolling Stones, changed us from just another band into a huge, monster band … It has a very catchy title. It has a very catchy guitar riff. It has a great guitar sound, which was original at that time. And it captures a spirit of the times, which is very important in those kinds of songs … Which was alienation.” – Mick Jagger

Yes Mick, we know it propelled you to international stardom but we’d love to hear more tunes like “Sweet Virginia,” “Monkey Man” and “Moonlight Mile.” The Stones are many things but to confine their greatness into just one song, we think it’s just not fair.

Again, just because we want these songs to retire doesn’t necessarily mean we hate them. We just think there are plenty of other great classics out there that DJs and radio stations have unfairly overlooked. They deserve some airplay too.

In line with that, how about playing “The Last Resort,” “After The Thrill is Gone,” and “Too Many Hands” instead of “Hotel California?” Those are epic tracks that prove The Eagles are not your run-off-the-mill rock band. They were the real deal.

“Lyrically, the song deals with traditional or classical themes of conflict: darkness and light, good and evil, youth and age, the spiritual versus the secular. I guess you could say it’s a song about loss of innocence.” – Don Henley

Maybe part of the appeal had something to do with the rumors that the song talked about addiction and Satanism. But The Eagles already clarified the actual meaning of the song which is why we think this should take a back seat.

Freddie Mercury was a genius. He took risks no one else would even dare to consider. He didn’t allow himself to be confined by rules and conventions. As a singer-songwriter and performer, he always took everything to another level.

“Bohemian Rhapsody” was unlike any other rock song at the time. And decades later, it’s still widely regarded as an incomparable track. BUT, it’s like everywhere you go someone is singing or playing it. And because of the overexposure, the rest of the songs on the monolithic record “A Night at the Opera” are not getting the credit and recognition they so richly deserve.

“”Bohemian Rhapsody” didn’t just come out of thin air. I did a bit of research although it was tongue-in-cheek and mock opera. Why not?” – Freddie Mercury

It’s a popular song, that’s pretty much a given. But it’s about time it should retire just to give way to some of those Queen tunes which are far more superior but have gotten less airplay.