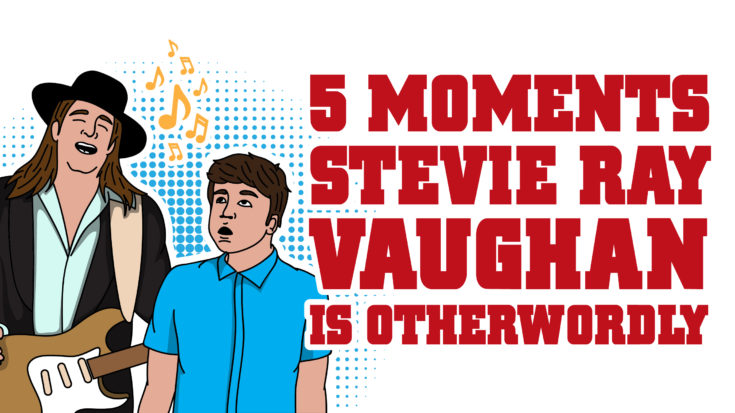 You know, we could just say Stevie Ray Vaughan is a guitar god and no one would disagree. He set the bar higher with his playing and while his career was short-lived, there’s more than enough material to give us a glimpse into his greatness. Here are five of his finest performances:

This is electrifying to say the least. And it perfectly captured the moment Stevie Ray Vaughan was slowly propelled into stardom. The intensity of the performance is almost palpable and we can only imagine how exhilarating it is for the audience. Warning: it’s jaw-dropping. You can’t watch this and not be amazed. Is he for real? It’s like he’s baring his soul here, the total embodiment of music. It’s a work of art – almost like a religious experience. And after he does that whammy dive? That’s pure, unadulterated eargasm. Perhaps one of the best things about this is he made this as his own – he may have emulated Jimi Hendrix’s style but he added his own flavor to it. If anything, it’s the perfect proof of his musicality. You can only describe those phrases as emotionally expressive. The blazing vibrato, licks and bends are simply out of this world. It’s hands-down flawless.

Let’s all be honest here, “Voodoo Chile (Slight Return)” is a masterpiece. And any guitarist who takes it upon himself to cover it would admit that it’s an ambitious undertaking. That takes balls of steel. But well, we all know SRV is more than capable of making Jimi Hendrix proud. With so many musicians out there, sometimes they only have one shot at making a lasting impression. SRV accomplished it with one song. He’s so powerful he can snap the guitar strings – you’d have to be superhuman to do that! When he was interviewed by Guitar World in 1985, he said: “I love Hendrix’s music and I just feel it’s important for people to hear him. I know if I take care of his music that it will take care of me. I treat it with respect—not as a burden. See, I still listen to Hendrix all the time, and I doubt I’ll ever quit.”

How can we best describe this? Spectacular? Stellar? It’s one of the things that’s going to make you believe in the impossible – a guitarist pushing his notes from his axe. Not everyone can pull that off, mind you. His guitar skill is unmatched but it’s always how he delivers that makes such a huge difference. He pours his soul out and this just gets right to you – something no other musician can manage. You know, not everyone can have that kind of effect on people. Listening to this in 2016 will make you realize his music knows no bounds – it transcends time. It’s just so full of magic! Playing like this requires a massive amount of energy and intensity and it makes you wonder how much SRV gives with every performance. He took blues to the next level. There’s raw emotion coupled with controlled rage – the absolute best of both worlds. It can’t get any better than that!

What better way to honor your wife than to create a beautiful ballad for her? From the spine-chilling solo section to the melodic phrases – SRV plays it effortlessly and flawlessly. It’s SRV at his finest. And might we also point out how laid back and chill this performance is? It reminds us of the time when he was ripping his guitar like a beast while smoking a cigarette. This is possibly the best version of this song. It will give you goosebumps and will likely move you to tears. It’s so raw with emotion that you can’t help but fall under SRV’s spell. Remember the first time you heard it? It will literally stop you in your tracks. How can something so rich and moving even exist? How can something excite and relax you at the same time? This speaks to you in profound ways. It’s SRV’s gift to mankind.

SRV’s second stop at the Montreux Jazz Festival was probably more memorable to most fans because the crowd was more enthusiastic and the gig had a more overall positive vibe and ambiance. However, we think that the performance that started it all deserves the top spot. The reception wasn’t that great since they were booed off stage but he was able to impress one man who was integral to his future success – Jackson Browne. He was so impressed and he offered for them to use his personal recording studio for free. For the record, this seems like it’s just another jam session for him (with no less than the heaviest gauge strings you can find). It’s nothing like you’ve ever seen before – a guitar god in action! Besides, you have to give it to SRV for carrying on and playing despite the negative reaction from the audience. That says a lot!