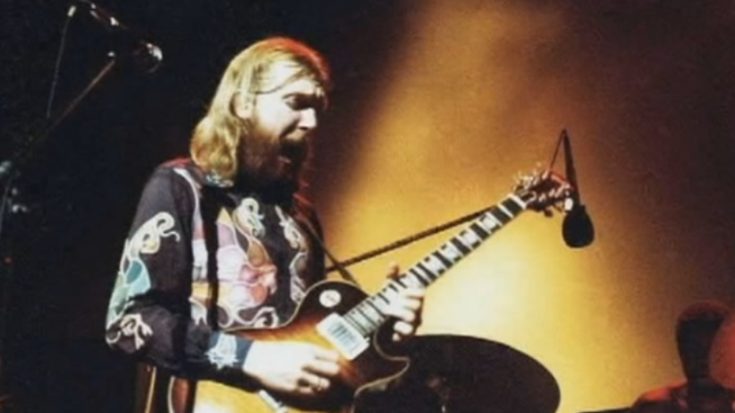 Few people could appreciate the strength of Duane Allman’s guitar playing. While he is heavily regarded as one of the pioneers of southern rock, it’s almost as if he is still underappreciated in his own time. Among the founding members of the Allman Brothers Band, he played not to steal anyone’s spotlight, but to guarantee to give the best potential on each and every instrument from the group. Unfortunately, we never got to see the guitarist’s full power when he tragically died from a motorcycle accident. But still, if there ever was a debate on who’s the greatest guitar player in the history of rock, maybe you could take time and reflect on your list with these 5 essential Duane Allman guitar solos. Let’s take a look.

Eat A Peach was perhaps the most heartbreaking album for the group, for the reason that this was the final album from the legendary guitarist. “Blue Sky” was the final guitar piece that Allman has contributed to before he died. A mixture of beauty and sadness spirals the whole song, which makes it so bittersweet to hear.

Everyone could associate “Layla” as an Eric Clapton song, yet Duane Allman also gave his fair share of talents for this lovely gem. Born during the collaborative efforts from these two guitar legends, Clapton was instantly infatuated with Allman’s guitar riffs that he invited the young man to record this hit. Such a lovely creation.

“Why Does Love Gotta Be So Sad”

Derek and Dominos’ Layla And Other Assorted Love Songs became wonderful all thanks to how Duane Allman’s catalyst playing came through. Clapton and Allman bonded over the song like they were long-lost brothers who found their way through music. The guitar solo is a must-listen for any occasion, whether you’re happily married or tormented about love.

The song goes way back to the 1920s, yet it was Taj Mahal’s version that inspired Duane to innovate and create The Allman Brothers Band’s version. It was recorded during their iconic Fillmore East concert in 1971, where Allman used his talent in the slide guitar, which made the concert-goers be shocked to their cores. It is one of the most famous guitar contributions of Allman for the group.

Everyone who knew Duane Allman’s legacy could recognize this song to have contained the legend’s greatest guitar solo of all. While the album version was top-notch, it was the 23-minute live version of “Whipping Post” from their Fillmore East concert that cemented his greatness as a live performer. No doubt about it, this is the best.