5 Artists Who Allegedly Ripped Somebody 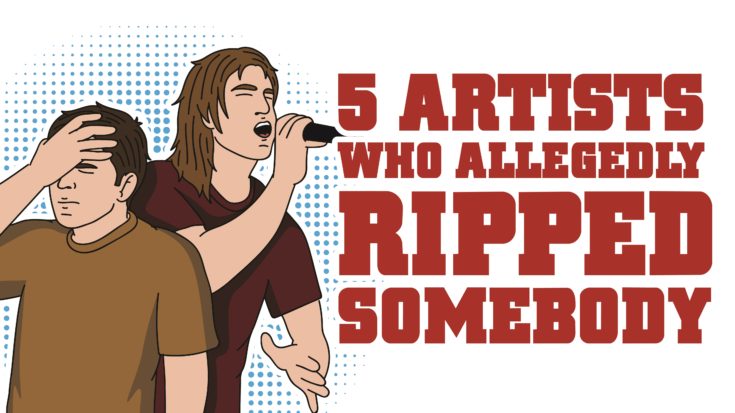 It’s not easy being original when you’re in the music business. Even if we say there’s an unlimited pool of riffs and bass lines, it’s sometimes inevitable for one song to sound a bit similar to another. This isn’t uncommon where creativity is concerned – remember J.K. Rowling who was once sued for plagiarism after allegedly ripping off another author for her famous Harry Potter series?

Yup, it happens everywhere. Some claim they’re taking some inspiration and paying tribute which are understandable. Others are not so innocent and even go so far as openly admit they lifted their tune off of someone else’s.

Keep in mind though that unless one party took it to court, these are allegations. And whether the artist/s are guilty or not, we’ll leave that to you to decide.

The Beach Boys’ “Surfin’ USA” is a classic anthem. Brian Wilson never denied borrowing the melody from Chuck Berry’s “Sweet Little Sixteen” but when the song was released, only Wilson was credited as the songwriter. Although Wilson called it a tribute to the rock ‘n roll legend, Berry’s publisher and lawyers considered it “plagiarism.”

Maybe the main issue here isn’t the intention but rather the fact that The Beach Boys didn’t ask Berry’s permission first.

“I was going with a girl called Judy Bowles, and her brother Jimmy was a surfer. He knew all the surfing spots. I started humming the melody to ‘Sweet Little Sixteen’ and I got fascinated with the fact of doing it, and I thought to myself, ‘God! What about trying to put surf lyrics to ‘Sweet Little Sixteen’s melody? The concept was about, ‘They are doing this in this city, and they’re doing that in that city’ So I said to Jimmy, ‘Hey Jimmy, I want to do a song mentioning all the surf spots.’ So he gave me a list.” – Brian Wilson

Apart from being an iconic song, it’s also one of the first major plagiarism cases in the history of rock music. Nevertheless, it was settled when Wilson’s father and the band’s manager Murry gave Berry royalties and also songwriting credits.

Even with three of the greatest songwriters in their band, The Fab Four wasn’t immune to lawsuits involving plagiarism and it didn’t happen only once. “Revolution” was ‘inspired’ by Pee Wee Crayton’s “Do Unto Others,” they also used the guitar parts in Bobby Parker’s “Watch Your Step” for “I Feel Fine” and “Day Tripper.”

There’s actually more but one of the most controversial is “Come Together” which opened with similar lyrics to Chuck Berry’s “You Can’t Catch Me.”

“It wasn’t a rip-off; it was a love-in. We pinch as much from other people as they pinch from us.” – Paul McCartney

They settled out of court – it wasn’t Berry who sued them but Morris Levy, owner of Big Seven Music Corp which was Berry’s publisher. The agreement was for John Lennon to record three more songs which Levy owned. That’s pretty clever.

Welcome to rock music – where you are not even allowed to sound like yourself. John Fogerty came back from his hiatus with the album “Centerfield” and the lead single was “The Old Man Down the Road.”

It was a chart-topper but it didn’t escape a lawsuit. You see, according to Fantasy Records owner Saul Zaentz, the chorus to this Fogerty track sounds eerily familiar because it’s the same one as Creedence Clearwater Revival’s “Run Through The Jungle.” Oh and that was written by Fogerty too.

“I proved that, no, I didn’t copy myself, I invented something new that really sounds a lot like me. Do you find fault with Elvis for sounding like Elvis? When McCartney sounds like McCartney or Dylan sounds like Dylan? No one else ever had to go through that.” – John Fogerty

It’s as bizarre as it can get. Well, Fogerty was CCR’s driving force and man, was he a brilliant songwriter! Nevertheless, they took it to court and the case was eventually dismissed with the judge ruling in favor of Fogerty.

If we had to name ten artists who we think has committed copyright infringement, George Harrison wouldn’t be on that list. The Quiet Beatle and “plagiarism” shouldn’t even be mentioned on the same breath. Unfortunately though, it happened.

“My Sweet Lord” was a massive hit for Harrison and in fact, it was the first #1 single ever by any former member of The Beatles. What made it more famous was that many people claimed that it had similarities to The Chiffons’ “He’s So Fine.”

Bright Tunes Music Corporation filed a case and the verdict was that Harrison “subconsciously” copied the other tune.

“Did Harrison deliberately use the music of He’s So Fine? I do not believe he did so deliberately. Nevertheless, it is clear that My Sweet Lord is the very same song as He’s So Fine with different words, and Harrison had access to He’s So Fine. This is, under the law, infringement of copyright, and is no less so even though subconsciously accomplished.” – Judge Richard Owen

Harrison also had to pay $1,599,987 in damages and he also claimed that at one point, he became to paranoid to write anything for fear it would once again result in another case.

Just like The Beatles, some artists ripped off Led Zeppelin and in turn, they have also been accused of plagiarizing. Well you know, unless you’ve been living under a rock, you’ve heard about the much-publicized copyright infringement case slapped against them last year. But that’s not the first time they got involved with musical swipes.

From Joan Baez to Muddy Waters and Howlin’ Wolf – we can create a separate list for that. But of course, we’re here for the juiciest of all – “Stairway to Heaven.”

Over the years, people have pointed out similarities between this Led Zeppelin classic and Spirit’s instrumental track “Taurus.”

“People always ask me why “Stairway to Heaven” sounds exactly like “Taurus”, which was released two years earlier. I know Led Zeppelin also played “Fresh Garbage” in their live set. They opened up for us on their first American tour.” – Spirit guitarist Randy California

The jury ruled in favor of Led Zeppelin but earlier this year, Spirit’s lawyer filed an appeal. We’ll just have to wait and see where this goes.