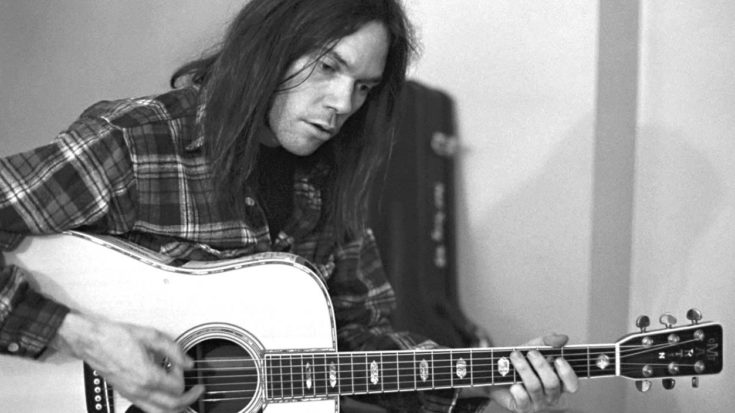 In 1970, singer-songwriter Neil Young rendered the world speechless when he penned the chilling counterculture anthem “Ohio”. Just 25 when the horrors of May 4, 1970 resulted in the shooting deaths of four Kent State University students at the hands of National Guardsmen, an outraged and grief stricken Young set to work on “Ohio,” a counterculture anthem for the ages and one of his finest pieces of work to date.

What’s striking about this footage of “Ohio” from Neil’s 1971 Massey Hall performance isn’t so much the song itself, but the cinematography; instead of being in a spotlight and filmed from the center of the stage, Neil is shrouded in shadow with eerie red and blue filtered lights shining over him and the footage is cut in quick, rapid fire shots – never focusing on Neil for more than a moment or two before dancing off to another angle, the lighting effects mimicking the speed of bullets whizzing by.

“David Crosby Cried After This Take.”

In the liner notes for his 1977 anthology Decade, Neil wrote:

“It’s still hard to believe I had to write this song. It’s ironic that I capitalized on the death of these American students. Probably the biggest lesson ever learned at an American place of learning. My best CSNY cut. Recorded totally live in Los Angeles. David Crosby cried after this take.”

While this could be seen as distracting, it makes the message of “Ohio” that much more important – focusing on what Neil saw as a deeply unsettling event and using him as a voice for the frustrations of many as a means to hold society accountable, instead of merely having a good time and at the end of the song, returning to life as usual.

We’ve seen this footage several times and it still shakes us to the core – we can only imagine the swell of emotions experienced by Neil’s audience that night.