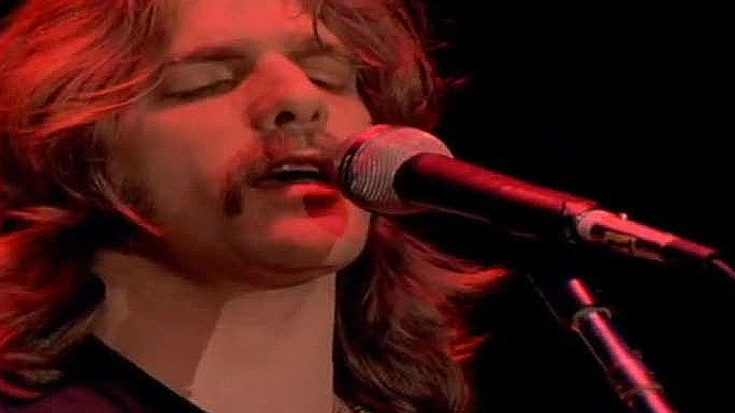 As we mourn the loss of the Eagles’ Glenn Frey, we also remember the career defining performance that was the band’s 1977 appearance at Washington D.C.’s Capital Centre. Critically acclaimed for both cinematography and the performance delivered by the Eagles as they ran through some of their most enduring hits, it was Glenn’s vocal performance on Hotel California’s debut single “New Kid In Town” that remains a tremendous favorite among Eagles fans young and old.

Just 29 and riding a wave of success due in no small part to the Eagles’ fifth studio album Hotel California, Glenn’s performance at Capital Centre can be described only as equal parts grace and quiet power.

Supported by the four part harmonies of bandmates Don Felder, Don Henley, Joe Walsh and Randy Meisner, Frey makes for quite literally everything a successful frontman should be – fiercely talented both vocally and as a guitarist, it doesn’t hurt that he was pretty easy on the eyes, too!

Fun Fact: This song is referenced in Don Henley’s solo debut “Johnny Can’t Read,” which ends with the lyrics “There’s a new kid in town…”

Watching this 1977 footage is bittersweet; on one hand, “New Kid In Town” makes us smile because for a few moments it’s like nothing’s changed – Glenn is where he belongs, onstage and taking on the world with a brand of rock and roll uniquely his.

On the other hand, it’s a stark reminder of the heartbreaking loss the rock world just suffered with Glenn’s death – yet another in a stream of what seems to be too many, too soon. Join us in remembering a great man and an even greater musician with footage of a performance that can only be described as career defining.