11 Songs Guaranteed To Soothe Your Hangover 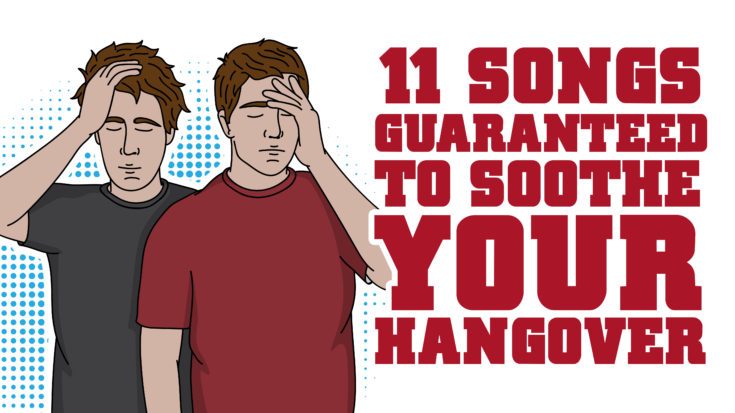 Had Too Much To Drink?

So you probably had way too much fun last night and now it feels like The Rolling Stones are having a party inside your head. And maybe, you’re looking for something to ease that ‘cocktail flu’ – well guess what, ‘peace and quiet’ is for the weak.

Take it from the pros – turn on that coffee machine, sit back and crank up your speakers. Deal with the hangover in the most rock star fashion possible.

Oh and these go well with a plate full of bacon too.

It always feels like Sunday morning the next day after a night of indulgence. This is a great way to ease the headache and shitty feeling – how many times did you promise yourself this will be your last hangover? Ha! Of course, it helps you realize and re-think all your life choices too. Lol. Count on Lou Reed to remind you of your mistakes the evening before. Well to be honest, you can just play the whole album of Velvet Underground to help you recuperate – “Candy Says” is a good pick too. It’s soothing and makes you want to lie down on your bed all day long. “Sunday Morning” is a lot like a soft, fluffy pillow to cushion your head against all the after-party headache – you know, when you feel like Neil Peart is having the time of his life banging away inside your skull. Yes, let Lou Reed remedy all that.

Don’t take the title literally please. Just stop with the drinking already and leave your liver in peace. Lol. I know you probably feel like a hot mess right now, maybe full of promises you won’t ever do it again. Take it from Lindsey Buckingham when he tells you, “Open your eyes and look at the day / You’ll see things in a different way.” Yeah, man. You’re not dying, you’re just hungover and we know it’s not the best feeling in the world. But this sweet, sweet music might make you feel like a normal person again. After a cup of Joe and a slice of toast, turn on your speakers and enjoy Fleetwood Mac until you feel okay again. You can also listen to “Dreams” by the way and seek the aid of our witchy godmother Stevie Nicks. Maybe she can do some magical wonders for your splitting headache.

Here’s a little secret from someone who’s been there, done that and probably still doing it after everything – if you don’t like ginger or peppermint tea, something to help you ease that feeling as if your dog just gave birth to 10 puppies in your mouth is *cue drum roll* banana combined with pretzels. It’s a pretty unusual combination right? But what wouldn’t you do for a brief respite from that crappy headache and all the other unpleasantness that go with it? Well anyway, this next song is a brief reminder of whatever craziness caused your hangover. To say it was a rough night is probably the understatement of the year. This is the kind of mellow you didn’t know you needed to hear. The solo breaks are insane and flawless at that. And might we add how much soul this has? It’s a great tune to put on repeat even during breakups too.

The best thing to go with this song is a cup of steaming coffee while you’re staring out your window and wondering just how much you drank last night based on all the drunk texts you discovered you sent. Lol. We understand this might make you feel melancholy but you don’t need anything too loud especially when it feels like a group of penguins are taking turns pecking inside your head. Warning though, this might make you extra emotional so don’t be surprised if your cappuccino starts tasting weird because it’s probably your tears falling on it. But you’re not crying, maybe there’s just some rain on your face. Don’t worry, we won’t judge you. Any cold-hearted kid will be moved to tears especially when they’re suffering from hangover. You just get extra sensitive to so many things – from smell to sound. We know what you’re going through, trust us.

Can we all take a moment of silence to appreciate how strangely soothing Tom’s voice is? It’s like the feel of velvety cloth against your skin or a bunch of plush, fluffy pillows under your head after a whole day of tiring work. Or maybe, as if someone is stroking your hair ever so softly. Yes, it’s that relaxing. The hoarse and raspy edge though will remind you of whiskey and cigar – even more so, after last night. Lol. You probably are so fragile right now – physically and emotionally so just let Tom Waits do the work. It’s one of those times when you badly a friend and a comforting lullaby. We know you’re a rocker through and through but we also know, now’s not the time to play The Who or Guns ‘n Roses. Your head already feels heavy as it is, loud music will probably cause it to explode.

Ah, now here’s a real classic. We don’t know how much drink you had last night – there’s the pre-game, actual party and the after-party. You probable even had a nightcap. Everything was a great idea until the morning after – when you can barely remember a good four hours of the whole evening. It’s like that part never happened or was complete removed from your memory. And the perpetual question is, “How drunk were you?” Did you happen to reply to your own text? Or discovered you started charging your wallet? Or maybe bought a new pet hamster? No? Then you’re not really that bad. Lol. But seriously, this masterpiece by Simon and Garfunkel should always be on your hangover playlist because it’s what everyone needs after a crazy night – silence, silence and nothing but silence. But when you have mellow and sweet music as good as this, you need to crank it up.

This is the song that started an entire multi-million empire and may be the cause of your hangover too. It basically sums up every part night – all fun and games until we wake up groggy, bleary-eyed and feeling crappy. Do you know what our favorite lines are? “Wasted away again in Margaritaville / Searchin’ for my lost shaker of salt / Some people claim that there’s a woman to blame / Now I think, – hell it could be my fault.” Jimmy Buffett knows what’s up. Partying and drinking – they bring nothing but promises of fun. But the day after, that’s a whole new story. Still, “Margaritaville” ought to give you some positivity and good vibes. God knows you need a bucket load of both. It doesn’t matter if you woke up at noon or late afternoon, this song is like a burst of sunshine minus the glaring light and headache.

What type of drunk are you? Are you the loud one who likes to go on rounds making sure everyone’s having fun and making them drink more? Or are you the kind who is constantly on denial and keeps on reassuring their friends that they’re sober even when they’re so far from it? Or maybe, you regularly lose your wallet, credit cards or phone and only find out in the morning? It doesn’t matter. This track from Kings of Leon will do the trick – no, it won’t make all your lost stuff magically appear in your drawer but it will give you some relief from the hangover. You’ll be amazed how good the vocal performance is and you’ll definitely want to listen to it over and over again – even if you’re no longer suffering from hangover. And with the line, “She took my heart / I think she took my soul,” you’d think this is good for heartbreaks too… or not.

If you’re thinking of opening the curtains while the sun is bright and shining, you might want to think again. Unless you want to know how a vampire feels like when they get a glimpse of the scorching hot sun after a night of indulgence, then go ahead. You need to listen to this first if you want to be on your way to becoming a functional human being again. Did we tell you this is one of our favorite songs? Yes, sir. And if you were a teenager when this came out, then you are one lucky dude. But we’re going to assume you’re not that old yet because if you are and you’re still trying to get over a nasty hangover, then good luck. Then again, with this playlist, you’ll be okay as long as you drink lots of water and maybe learn your lesson and not go out anymore. Lol.

Maybe you want to tell Neil Young why your liver is on fire right now – that is, if you can recall anything. Who needs to see the sun when you can just stay under the sheets and not get out of bed until it’s dark outside? This is one of those mellow rock songs that you want to put on repeat and it doesn’t matter if you’re a hot mess, look like crap or feel worse than you look. Neil doesn’t judge, Neil understands. You see, if everything is too much (the sound of traffic, your annoying and loud next-door-neighbor, the fighting couple downstairs), Neil will give you the peace you need. He’s like giving you a sweet, warm hug and trying to give you an understanding look while telling you don’t really look that bad. Then again let’s face it, you obviously don’t look your best. You have ‘hangover’ written all over your face.

Can you still remember your worst hangover ever? You know, when you were practically dragging yourself out of bed and looking like you just came from a 12-hour shoot for a five-second cameo in The Walking Dead. Don’t worry, we got you covered. Besides, George Harrison is known for his musical masterpieces which double as a warm hug from a friend. Yes, sir. It’s soothing and relaxing like that. This is the work of a genius, by the way and it’s one of the greatest songs ever written. We’ve always had a soft spot for him – he’s always had a different kind of charm from the other Beatles. Maybe that’s why he’s called the Quiet Beatle. And he’s there when you need something during your most trying times – when you just broke up with your girlfriend or when you overindulged and have to suffer the consequences of each bottle of liquor you finished.