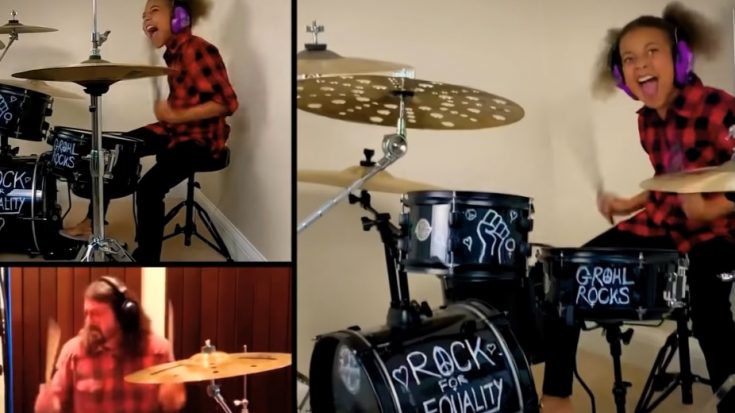 While music in 2020 has suffered greatly as a result of the pandemic, some stories of resilience and love for the craft surfaced to inspire and influence. Such is the story of 10-year old drummer prodigy Nandi Bushell and Foo Fighters frontman Dave Grohl, who engaged in a drum battle after the former issued a fun challenge to the veteran rocker.

After accepting the challenge, Grohl performed Them Crooked Vultures’ “Dead End Friends” and passed the task onto Bushell, who matched his performance excellently. It all started when Bushell did her rendition of the Foo’s “Everlong”, where she first issued a challenge towards Grohl. The frontman responded by doing the song on his own 11-year old daughter’s drum kit before going full blast with his version of “Dead End Friends” of his supergroup, Them Crooked Vultures. The band has Queens of the Stone Age’s Josh Homme and Led Zeppelin’s John Paul Jones.

Bushell excitedly posted a reaction video but didn’t back down and accepted Grohl’s counter-challenge as well. True enough, the child prodigy mastered the track in a week’s time, even sporting the same looks Grohl had on his challenge video.

Ok, @Nandi_Bushell ……you win round one….but it ain’t over yet! Buckle up, cuz I have something special in mind…

“It was an honour to be part of the most #EPIC #ROCK in battle in history! With the most awesome, fun, kind and legendary Dave Grohl! Thank you for giving me this incredible opportunity. I am extremely grateful. The Rock Gods of old are happy!” Bushell wrote on the YouTube description of her video.

Watch Nandi Bushell trade blows with Dave Grohl in her response video below!